This profile of King Britt is the third entry in our new Artist Profile series, intended to introduce each contributing musician featured on the Wan Fambul/One Family benefit album. This compilation is available for a donation, with all proceeds going to the groundbreaking grassroots peacebuilding efforts of Fambul Tok in Sierra Leone.  Take a look at last Thursday’s profile of Bombino, and be sure to keep an eye out for our next post, Eccodek! 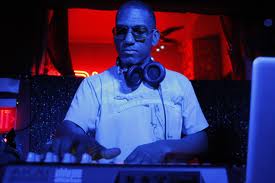 King by name, King by nature; King Britt is a truly pioneering musician who is widely recognized a member of the royal elite of the Dance Music world. Based in Philadelphia, King Britt has been breaking the traditional boundaries and forging a unique path as a producer, musician, DJ, label boss and media revolutionary for over 20 years.

King has always found a way to escape the strictures of any single category of music by working across genres such deep house, hip-hop, broken beat, nu-jazz, funk and afro-tech. Releasing his first record (E-Culture – ‘Tribal Confusion’) in 1990, King went on to tour worldwide with Digable Planets – the Grammy award winning hip-hop fusion band – whilst continuing to develop his love of Dance Music culture and laying the foundations for his prodigal solo career.

In 1994, alongside Josh Wink he launched Ovum Recordings and also formed Sylk130 – a collective of Philadelphia’s finest musical talent including Lady Alma, Alison Crockette and Ursula Rucker. He produced Sylk130′s first album (‘When The Funk Hits The Fan’), which went onto sell over 500,000 copies and essentially provided the blueprint for the Philly Neo-Soul resurgence.

In addition to these achievements, King is one of the world’s most respected remixers. He has added his unique touch to hugely diverse range of artists such from Miles Davis, The O’Jays and Curtis Mayfield through to Macy Gray, Solange, Femi Kuti and Everything But The Girl. King has also scored and underscored music for films, TV series and commercials. In 2007 he became the first DJ to be awarded the prestigious Pew Fellowship.  King is also a Creative Cultural Ambassador for his hometown of Philadelphia.

As a DJ, King Britt is hugely versatile – a chameleon behind the decks.  He has toured extensively across and throughout Europe, the U.S. and the Far East as well as rocking premier nightspots throughout the world.

While King does not consciously use his music to bring about social change, he instead feels “just the act of creating is a form of social change.  Music has been my vehicle to travel and be a storyteller through djing and performing… We see [conflict] daily in our own lives, close to us.  Everyone seems to either be at war with themselves or their environments.  Music seems to bring the people together for a purpose and allows interaction and reaction.”

When asked to define his political philosophy, Britt responded: “I really stopped thinking about politics in the structured sense and I try to think about frequency and resonating with people’s inner voice instead of the outer.  As soon as you begin to think in a structured political sense, you start to lose purity in purpose.”

Britt sees himself as “just a messenger that is a conduit for divine intervention…. I am sending sound from a higher place.  I think it is important for everyone to remain open, you will be surprised at what you will discover about yourself and others.”

To learn more about King Britt, visit his webpage.