This profile of Bombino is the second entry in our new Artist Profile series, intended to introduce each contributing musician featured on the Wan Fambul/One Family benefit album. This compilation is available for a donation, with all proceeds going to the groundbreaking grassroots peacebuilding efforts of Fambul Tok in Sierra Leone.  Take a look at Tuesday’s profile of Bajah + The Dry Eye Crew, and be sure to look out for our next post, King Britt!

Wan Fambul/One Family features Bombino’s song  “Ahoulaguine Akaline.”  In addition, King Britt does a powerful remix of this track, available soon as a bonus feature when you like Fambul Tok on Facebook.

Bombino will be performing in Portland, ME at the University of Southern Maine’s Hannaford Hall on Wednesday, April 4. Representatives from Catalyst for Peace will be at the concert, and copies of the Wan Fambul/One Family benefit album will be available for donation. For more information and to purchase tickets, visit the concert’s event page. 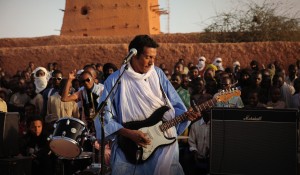 Omara “Bombino” Moctar is known as one of the greatest guitar players and performers in the Sahel and Sahara regions, where he has a wide following.  He was born in 1980 into a family of nomadic Tuareg herders living in the region of Agadez, Niger, at the edge of the Sahara.  Following the outbreak of the Tuareg Rebellion in 1990, Bombino, along with his father and grandmother, were forced to flee to neighboring Algeria for safety. By 1997, Bombino had returned to Agadez and began his life as a professional musician.

In 2007 tensions grew again in Niger and ultimately erupted into another Tuareg Rebellion. The government, hoping to thwart the rebellion in all its forms, banned guitars for the Tuareg, as the instrument was seen as a symbol of rebellion. Additionally, two of Bombino’s fellow musicians were executed, thus forcing him into exile.

While Bombino lived in exile in Burkina Faso, filmmaker Ron Wyman, having heard cassette recordings of his music, decided to track him down. Wyman encouraged Bombino to properly record his music. Bombino agreed, and the two of them produced an album together in Agadez. The recordings culminated in his album Agadez, released in April 2011 which debuted at the top of the iTunes World Chart.

In January 2010, Bombino was able to return to his home in Agadez.  To celebrate the end of the conflict, a large concert was organized at the base of the Grand Mosque in Agadez, having received the blessing of the Sultan. Bombino and his band played to over a thousand people at the concert, all dancing and celebrating the end of their struggle.

Bombino explains that Niger’s problems stem from “the arbitrary African borders drawn by the colonial countries at the end of the colonization period in the middle of the 20th century.”  These borders did not take into account different ethnic groups and there has been a constant struggle to achieve national unity within Niger.  Despite having the largest uranium supply in the world (located in the Tuareg’s Agadez region), Niger ranks 167th of 169 nations on the United Nation’s Human Development Index.  Bombino blames this in part on an unnecessary and expensive military convoy that is used to protect the transportation of the materials in the region.  Bombino identifies finding a way to share the profits from the sale of uranium and employing local residents in the mines (instead of hiring people from others areas) as extremely important issues within Niger.

For Bombino, music provides an opportunity “to speak about [the Tuareg’s] problems and propose solutions to resolve them according to what I see and what I have experienced…  I also sing about the war and its consequences on our life in order to contribute to the peace process.”  Bombino’s popularity is a source of pride for both the Tuaregs and the entire country, which Bombino thinks will eventually help the Tuareg community gain political power ­– and ultimately allow them to collaborate with the government and create solutions for the community’s problems (for example, limited water supplies, medical infrastructure and quality schools.)

Bombino explains that “The Tuareg music is like Tamasheq (our language) or Tifinagh (our alphabet) because they are the most important elements shared by the Tuareg in all countries.  They are our identity, [which creates] a strong link. Our music is the same because it brings all the Tuareg together. After the second rebellion in Niger, we played music at weddings for people of other ethnicities. All these peoples loved the music, they danced together and renewed their relations by accepting each other in spite of their differences.”

Bombino wants his audience to understand that “the desert is the most beautiful and peaceful place in the world.  I invite anyone to discover it.  [The Tuareg] are one of the most open cultures and we are ready to share it with the world through music.”

To learn more about Bombino visit his webpage.