This profile of Abjeez is the fifth entry in our new Artist Profile series, intended to introduce each contributing musician featured on the Wan Fambul/One Family benefit album. This compilation is available for a donation, with all proceeds going to the groundbreaking grassroots peacebuilding efforts of Fambul Tok in Sierra Leone.  Take a look at last Thursday’s profile of Eccodek, and be sure to keep an eye out for our next post, Vusi Mahlasela! 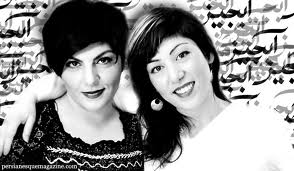 Abjee (aab.gee) is Persian slang for “sister” and that’s just what they are – sisters Safoura and Melody Safavi.  Backed by a colorful crew of musicians, the two abjees present their own original brand of Persian world pop.  Their lyrics, often humorous and occasionally rebellious, are written in Farsi, English, Spanish and Swedish.  The expressive groove of the music and the abjees’ dramatic delivery break down all language barriers to create a new synthesis of cultures.

Born in Iran shortly after the revolution, Safoura and Melody moved to Sweden when they were 13 and 12 years old, respectively.  While it is illegal to buy the band’s CDs in Iran, much of the feedback they receive comes in the form of emails from Iranian fans explaining “how their favorite Abjeez songs have affected them personally and [in] their lives.”  These dedicated fans sometimes ask for the notes and chords to songs and send their own music – asking Abjeez to listen to it and give them feedback. “They constantly encourage us to continue our work and they are our greatest inspiration,” the girls explain, and the band’s dream is to someday perform a concert back in Iran for these loyal fans.

Abjeez also wrote several songs in support of the freedom-seeking people of Iran during the aftermath of the 2009 Iranian presidential election, explaining “Those songs raised a lot of attention among Iranians worldwide. One of them was frequently played in different Iranian rallies in support of the Iranian Green Movement and we [continue] receiving positive response for it, which makes us realize how important our role can be, as advocates of the peace-seeking people, especially the women and youth. We try to shed light on their issues and help spread their call for help wherever we perform.”

Abjeez believes that music is an excellent tool for unifying people: “Most conflicts are based on a lack of understanding and communication. Music creates unanimity. Historically we can see that music has always played an important role in all great wars and major conflicts. In every single country in the world when people go out on the streets to demonstrate for or against something, they chant. There are revolutionary songs writers who have not only been the voice of their own country but the have turned to the voice of justice and freedom in the entire world (like for example the works of Victor Jara). Governments and different political groups around the world use artists and their music to incite people’s feelings and emotions in their political campaigns.”

According to Abjeez: “Music is a universal language that belongs to everybody. No matter what religious or political view we might have, music resonates in the very same way in our bodies. We often focus on our differences and therefore conflicts arise. When we instead focus on our similarities we don’t need to be afraid, or to defend our ideas and ourselves. Tolerance arises and we allow ourselves to learn and grow.  We try to use the power of music in such way by creating a loving and positive ambiance for our audience to shed light on cultural and social problems in an often humorous and direct way so that we [are] all in a relaxed state of mind [and] can see, recognize, heal and find the strength to change for the better.”

To learn more about Abjeez, visit their webpage.