This profile of Dengue Fever is the twelfth entry in our new Artist Profile series, intended to introduce each contributing musician featured on the Wan Fambul/One Family benefit album. This compilation is available for a donation, with all proceeds going to the groundbreaking grassroots peacebuilding efforts of Fambul Tok in Sierra Leone.  Take a look at our earlier post on Sierra Leone’s Refugee All Stars, and be sure to keep an eye out for next week’s profile, Saba Saba ! 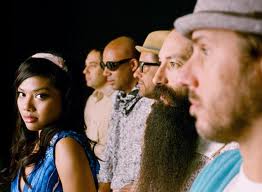 Even when you consider the cultural cross-pollination that goes on in large metropolitan areas, Los Angeles’s Dengue Fever had perhaps the strangest genesis of any band in recent memory. It’s odd enough for a group of white musicians to cover psychedelic rock oldies from Cambodia, but finding a bona fide Cambodian pop star to front the band — and sing in Khmer, no less — is the kind of providence that could only touch a select few places on Earth. Formed in L.A.’s Silver Lake neighborhood in 2001, Dengue Fever traced their roots to organist Ethan Holtzman‘s 1997 trip to Cambodia with a friend. That friend contracted the tropical disease (transmitted via mosquito) that later gave the band its name, and it also introduced Holtzman to the sound of ’60s-era Cambodian rock, which still dominated radios and jukeboxes around the country.

Since their inception, the band’s unique take on 1960s Cambodian pop and American surf rock has garnered praise and attention from fans and critics alike. True Blood named an entire episode after one of their songs and featured the band’s music throughout the show, Spin highlighted the band in their ‘Breaking Out’ section, and profiles on the group have appeared in the New York Times, Magnet, Wired, and NPR’s “Fresh Air” and Radio Australia. Ray Davies from the Kinks called them “a cross between Led Zeppelin and Blondie.”

The band is very much inspired by the political climate that spawned 1960’s Cambodian pop-music: “These original musicians were killed for playing music. By shining more light on this incredible body of work, it allows more people to learn what happened when Pol Pot and the Khmer Rouge took over Cambodia. It must never happen again.”

To learn more about Dengue Fever, visit their webpage.