This profile of Bhi Bhiman is the ninth entry in our new Artist Profile series, intended to introduce each contributing musician featured on the Wan Fambul/One Family benefit album. This compilation is available for a donation, with all proceeds going to the groundbreaking grassroots peacebuilding efforts of Fambul Tok in Sierra Leone.  Take a look at last week’s post on Vieux Farka Touré, and be sure to keep an eye out for our next profile, Mashrou Leila ! 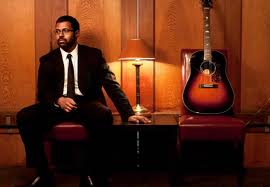 Bhi Bhiman is an American singer/songwriter of Sri Lankan Tamil descent, born and raised in St. Louis, Missouri.  He writes songs soaked in the grand folk tradition, penning both passionate protest songs and tender love songs with style. His skill is in stitching his music with a subtle sort of political consciousness that doesn’t feel like homework to the listener.  His love songs are always sweet with a touch of sad, while his protest songs range from laugh-out-loud funny to quiet-a-chatty-bar chilling.  But so what?  There are tens of thousands of singer-songwriters in America attempting just that – but they can’t sing like Bhi Bhiman. He belts out his songs with a voice that’s more sixties soul and Nina Simone than the semi-precious singing often associated with modern folk.

Bhiman addresses multiple social issues in his music ranging from race, class inequality, politics, love, greed, and heartbreak.  His songs endeavor to open listeners’ minds to subjects that they may not otherwise be accustomed.  Bhi explains: “I tend to talk about a darker side of life – people’s trials and tribulations.  Sometimes my characters ultimately triumph; sometimes they live to see their downfall.  I try to walk and talk as the characters in my songs, and I try to put the listener into their shoes as best as possible with lines that are universal and relatable.  I feel it’s my job to make you see the characters’ side of the story, whether they are right or wrong.  I ultimately want people to look at the world from all angles and viewpoints.  The good and the evil and the grey in between.”

In addition to his brilliant songwriting, Bhi is an advocate for his parents’ homeland of Sri Lanka, which he calls “one of the most beautiful destinations on earth.” When reflecting on the violent and complicated history between the Sinhalese and Tamil people Bhi points out: “While the majority of [Sri Lankans] are innately peaceful and tolerant, it’s the intolerant that end up being the most outspoken and violent.”  Bhi is “not a proponent of the Tamil Tigers and the violent tactics they used,” but he feels that “there was (and is) no one else speaking as the voice of the Tamil people in Sri Lanka.”  His main concern, as an outsider, is the transparency and accountability of the Sri Lankan government.  He is concerned about the “alleged war crimes that the U.N. is failing to investigate and the large numbers of Tamils still kept in internment camps, who are unable to communicate with loved ones on the outside.”  As well as the fact that: “the government does not seem to be in a hurry to relocate them to their homeland – mainly because they do not see it as their homeland.  Much of their centuries-old land in the north and east has already been ceded by the government to Sinhala citizens.  I do believe that Sri Lanka will be a safer, more secure country in the future, but whether the ends justify the means in this case is debatable.”

To learn more about Bhi, visit his webpage.