Gabe Hoffman-Johnson is a Senior at Dartmouth College. He is a Government Major, with a strong interest in the worlds of finance and non-profit work. Gabe plays in the midfield or defense for the Dartmouth Men’s Soccer team. Below, Gabe introduces his new program: Futbols for Fambul Tok. 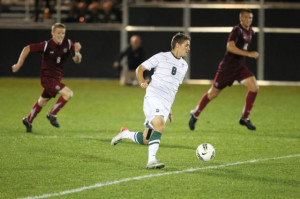 It all started with an idea I had spring of my junior year.  We were discussing the concept of ‘added value’ in my Business Management and Strategy course.  By definition, the term describes the difference between the price of a finished product or service, and the cost of the inputs involved in making it.  In other words, how much value is each input worth?  The concept really struck me as being applicable, not just as a business concept, but also to myself in the ‘real world’, outside of my school and immediate relationships.  I began to think about my own personal added value on a much greater scale, and what major contributions I brought to the table outside of my day-to-day activities.  I couldn’t come up with anything!  This realization is what motivated me to come up with a way to actually make a difference in peoples lives — Futbols for Fambul Tok was born!

At the most basic level, the goal of Futbols for Fambul Tok is to provide soccer balls for young children in Sierra Leone.  However, I believe it is also a great way to educate Dartmouth College and the surrounding New Hampshire community, uniting them for a good cause.  Maybe even motivate others to increase their added value!  My freshman year I was able to get Dartmouth College to host a showing of Fambul Tok the film, which was a huge success!  It opened many people’s eyes to the phenomenal work Fambul Tok is doing in its reconciliation efforts in Sierra Leone, as well as sparked conversation within the Dartmouth community.  With this upcoming event, I am hoping to achieve similar results.  Fambul Tok uses organized soccer matches as an important part of its reconciliation work in the villages of Sierra Leone, supporting community healing after their civil war.  I thought that gathering and donating balls would be a great way to educate the Dartmouth community about how Fambul Tok is working to build peace, and how even here in the Upper Valley of New Hampshire, we can play a role in that, through something that we love–soccer!

4 Responses to Futbols for Fambul Tok