Sermon preached on Fambul Tok at a church in Texas

We often find ourselves humbled by people’s responses to Fambul Tok (the film), and learning about a recent screening held at a church in Austin, Texas yielded another extraordinary example of this kind of response.  On the day that the Church of Conscious Harmony 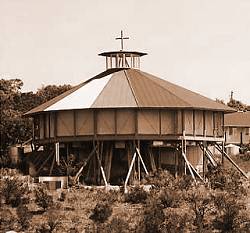 was due to host a screening of the film, Minister Tim Cook preached a sermon on Fambul Tok for the congregation.  His sermon was posted online, and we have excerpted here the section where he spoke about Fambul Tok.

He is obviously speaking in a Christian context, so I’m sure you’ll listen with that in mind.  But the way he internalized the universal values and message from the stories in the film moved me to tears.

A couple of factual corrections: the majority of Sierra Leoneans do in fact follow a religious tradition — just over half are Muslim, and just under half are Christian.  The founder of Fambul Tok is John Caulker; and the students at the Philadelphia School were in 6th grade, not 5th, when they had their own direct experience of Fambul Tok.  These are minor issues, however, given the depth of the way Rev. Cook expresses the ways in which the living example of Fambul Tok calls us all forward into higher expressions of community and communion.

Click here to listen to the sermon excerpt.  Enjoy.

Libby Hoffman is the President of Catalyst for Peace, Producer of Fambul Tok (the film), and a co-founder of the Fambul Tok program.
View all posts by Libby Hoffman →
This entry was posted in Recognition, Reflections, The Film and Book. Bookmark the permalink.