For the past few months, we have been collecting audience responses to Fambul Tok (the film) and the work being done on the ground in Sierra Leone through our “Postcards to Sierra Leone” initiative. Sharing these comments with the Fambul Tok staff and volunteers in Sierra Leone provides encouragement and inspiration, while also making clear the impact that their efforts are having on individuals communities across the globe. 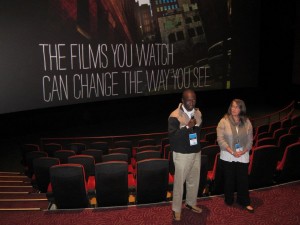 Inspired ourselves by the responses to the film, we are now launching a blog series to share some of these responses with an even broader audience.

One of our very first community screenings, held in October at the University of New Mexico Law School, brought faculty, staff and students together to screen Fambul Tok alongside Pray the Devil Back to Hell for their “Documentary and Discussion” feature. Following the film, a discussion was led by Prof. Jennifer Moore of the UNM Law School, featuring a small number of experts present to contribute different perspectives to the dialogue surrounding community-based reconciliation methods. Professor Moore also submitted our first Postcard, writing that it was a “…pleasure and privilege to help spread awareness of the work of your grassroots reconciliation program to my colleagues, students and fellow community members… The audience was deeply moved by the film, and the conversation started with simply honoring the power of the story — devastating, and yet uplifting.”

After an incredible 7 screenings at the Heartland Film Festival in Indianapolis, IN in October (where Fambul Tok was honored with the Crystal Heart Award),  we received feedback highlighting how viewers were touched by the universal themes represented in the film. David, an audience member, shared this thought for the people of Sierra Leone: “Our anger and fear of communication make us prisoners. I am glad you are being set free,” while Mark W., another viewer, echoed that “In the worst of tragedies to be able to ask for forgiveness, being willing and able to forgive — transforms and frees a person and a community to move forward.”

Stay tuned for more responses.  In the meantime, be sure to track our upcoming screenings or be in touch to bring the power of forgiveness to your own community. And feel free to submit your own Postcard to Sierra Leone today!

John Caulker is the Executive Director of Fambul Tok International.
View all posts by John Caulker →
This entry was posted in Reflections, The Film and Book. Bookmark the permalink.