The youth chairman of Mawei section, Peje Bongre chiefdom, Kailahun district has taken the people of Foindu village by surprise, making a recent revelation during a bonfire on April 15, 2013.

Testifying in front of hundreds of people, Aruna explained that during the early days of the war, he was captured by marauding rebels and was ordered by one of the then commando to kill a young girl. 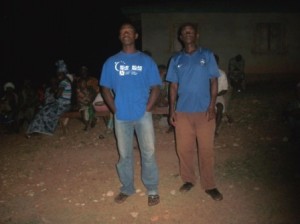 According to him, he took a knife and cut the throat of the girl in front of other captives. Since he returned to Foindu, he had never had the opportunity to  tell anyone, including the father of the deceased girl, who he describes as his family friend.

After his testimony, the father, Bockarie Musa, was shocked. He was not quite sure and therefore asked the perpetrator to repeat his testimony again but Aruna apologized in tears and said it was not his fault. Other villagers were also shocked, as they did not expect that Aruna would have spoken about his deeds during the war.

What surprised most people was Bockarie’s acceptance of Aruna’s apology. Bockarie told the gathering that he did not know who killed his only daughter until that bonfire, and said Aruna is his family friend and they do things in common, despite never having revealed the truth before. The two friends, amidst sorrow, embraced each other in the spirit of reconciliation.

Importantly, Aruna also tasted the bitterness of the war in the late 90s when he was severely beaten by local militias for planting cannabi sativa (diamba). During the bonfire, he confessed and forgave those who punished him during the war. They all embraced themselves and promised to be agents of change in their communities, working together.

Solomon Yarjoh is the Communications Director for the Fambul Tok program in Sierra Leone.
View all posts by Solomon Yarjoh →
This entry was posted in From the Ground: Program Updates from Sierra Leone, Kailahun District, Updates by District and tagged bajah, ceremonies, ceremony in Foindu. Bookmark the permalink.