Woman confesses to burning a house during the war 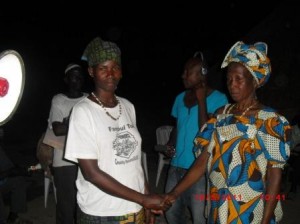 A woman who was captured and forced by the then Revolutionary United Front (RUF) rebels during to set a house ablaze has heaved a sigh of relief and now walks as a free person.

She explained how she was ordered by the rebels to set fire on Madam Soriba Sesay’s house and during that incident three people died in the inferno. She said she stayed with the rebels for three months.

‘I was always looking forward to apologizing to my people but there was no way except when Fambul Tok created a space for us so we can apologize and ask for forgiveness,” H.S. emphasized.

In response, the victim, Soriba Sesay, said she was shocked when she heard H.S’s testimony.

“When she called my names, I was really surprised because she had never told me anything about the incident but only now I realized that she was responsible for the atrocity,” Soriba told the gathering, adding, “now that Fambul Tok has asked us to forgive and reconcile, I am ready to forgive her.”  Both H.S and Soriba embraced each other for the very first time in the spirit of reconciliation.

Solomon Yarjoh is the Communications Director for the Fambul Tok program in Sierra Leone.
View all posts by Solomon Yarjoh →
This entry was posted in From the Ground: Program Updates from Sierra Leone, Koinadugu District and tagged ceremonies, ceremony in Kankaya, Koinadugu district, Sulima chiefdom. Bookmark the permalink.