It is now an open secret that communities are using Fambul Tok initiative to embark on development. Immediately after traditional ceremonies, villagers organize themselves to be actively involved in rebuilding their shattered communities. This is what happens in almost every community where Fambul Tok operates.

Most communities in Kailahun, Kono and Moyamba districts have now taken on community projects, and view them with pride as contributing to rebuilding the country. In Rogbora, Fakunya chiefdom in Moyamba district, eight villages came together to build a Traditional Birth Attendants’ house. Motonkoh community in Moyamba, which harvested 32 bushels of swamp rice out of just 6 bushels sowed last year, is now building a health post. Ndaabu in Kailahun district is also building a court barrie (community center). The list goes on and on! 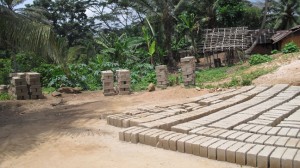 One of the  remote communities in  Kailahun district has built a three-classroom structure in Baidu, using the initiative of Fambul Tok.

According to the town chief of Baidu, three villages (Boloni, Mano and Baidu in Pokoli section, Kissi Tongi chiefdoms) came together to build the community school. Chief Sahr Lamin said there was no school in the community and the idea of constructing one was conceived immediately after the bonfire and ceremonies.

“Our children in Baidu, Boloni and Mano used to walk three miles to Buedu but now they are schooled here,” chief Lamin says.

Although a big step forward, the community still hopes for more.  The Head Teacher, George Williama, laments over the condition of the school and asked government and other organizations to assist. He says the school is roofed with thatches and when it rains the children rush to their houses.

“The structure leaks when rains come because we cannot afford roofing sheets. We want government and other agencies to come to our aid,” he said. “We only have three volunteer teachers and they are not on pay role,” he added, expressing his desire for more support as the number of enrollment increases on a daily basis.

Solomon Yarjoh is the Communications Director for the Fambul Tok program in Sierra Leone.
View all posts by Solomon Yarjoh →
This entry was posted in From the Ground: Program Updates from Sierra Leone, Kailahun District and tagged development, follow-up activities, Kailahun, Kono, Moyamba. Bookmark the permalink.