Makulon section in the Gbanti Kamaranka chiefdom, Bombali district, Northern Sierra Leone has 10 villages. Two of the villages, Makulon and Gbintimaria, according to their chieftaincy arrangements used to alternate power peacefully.

Almost 12 years ago, after the demise of the installed section chief,  there was conflict between the two villages as to which village will provide leadership. This resulted in disconnection among families and individuals to the point that some villagers  in that section deliberately refuse to visit Makulon and Gbintimaria for fear of being intimidated or harassed. According to a resident of  Gbintimaria, Mohamed, he had earlier stopped going to church in Makulon for fear of being molested and now walks over 5 miles to attend service every Sunday. The situation worsened when finally a new section chief was crowned in Gbintimaria.

Prior to the usual bonfire in that section, it was evident that there was conflict and if not resolved, it would be very difficult for Fambul Tok to operate. During sensitization, staff had to spend a night in Gbintimaria after a heavy day’s work. On the following day, staff traveled to Makulon, but there was a cold reception. This was because the people of Makulon thought that the staff had chosen Gbintimaria to do everything; they did not want to participate! 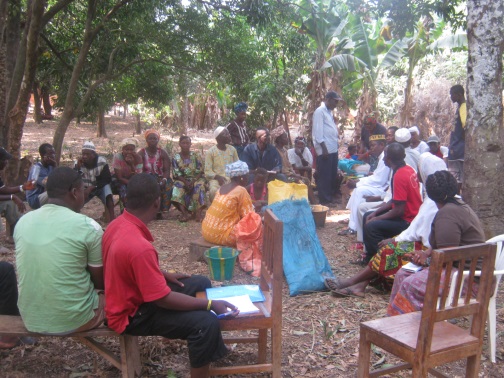 However, after spending several hours explaining to the residents of Makulon what Fambul Tok stands for and re-emphasising the core values, one of which is non political and non-partisan, they decided to participate, especially when they realized that Fambul Tok
is a community reconciliation program and has no connection with politics.

Many questions were posed on staff, some geared towards uniting the two divided villages. For this reason staff had to spend a night in Makulon, so everything could be put in place for the reconciliation ceremony.

To demonstrate that they want peace and unity after a decade in that section, a meeting was convened where elders of the two villages met for the very first time to plan for the reconciliation ceremony. It was agreed that  a resident of Makulon should be given the opportunity to coordinate the program.

During bonfire, other villagers were really surprise to see elders in the two conflicting villages dinning and dancing together.

The following morning after their traditional ceremonies, the staff visited neighbouring villages  and people were happy for bringing the two villages to together.

Solomon Yarjoh is the Communications Director for the Fambul Tok program in Sierra Leone.
View all posts by Solomon Yarjoh →
This entry was posted in Bombali District, From the Ground: Program Updates from Sierra Leone, Updates by District and tagged ceremony in Bombali. Bookmark the permalink.