Community members in Saaba section, Sowa chiefdom, Pujehun district, southern province have unanimously agreed to forgive and welcome Saffa Mambu back to their section after over 20 years.

The people of Vaawahun and Ngamayama villages in that section had harbored hatred for Saffa for a very long time because of the alleged actions of his late father, Pa Mambu, who, it was alleged, was collaborating with Revolutionary United Front rebels during the war in order to loot properties belonging to fleeing indigenes of Pujehun district. 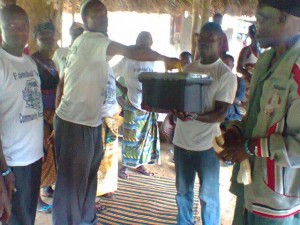 A member of the Reconciliation team presents the kits to Mambu

The late Pa Mambu’s luck ran out during one of his looting sprees when he came into contact with the Sierra Leone Armed Forces. According to the story, Pa Mambu and two other adults were carrying property to another village and were stopped and questioned by soldiers as to where they got the goods. It was reported that the three men answered that the items belonged to them but unfortunately, Pa Mambu’s child, Saffa, who was only five years old at the time, told the soldiers that the items had been looted. Pa Mambu and the other men were executed immediately.

Saffa, a very small child,, was rescued by a man named Bassie, who was the then Civil Defence Forces commander. He was brought up in the house of Bassie, but what remained a secret was that Bassie had never disclosed to Saffa what happened during the war. 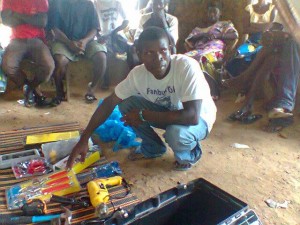 During Fambul Tok’s visit to Saaba section in Pujehun District, Bassie explained the full story of how he rescued Saffa from soldiers at the tender age of 5. Initially, he had some fear but after Fambul Tok’s sensitisation on the values and the need for reconciliation, Bassie was satisfied.

During a bonfire in Vaawahun village on May 17, 2013, Bassie came out and narrated the full story of Saffa and his father. The scene was emotional as Saffa himself did not know or remember anything about the death of his father and the two others.

Other testifiers also blamed Saffa’s father for their present predicaments. A good number of them in their testimonies said they have not been accomodating Saffa for what his father did during the war.

Saffa, who was very shocked and at a loss for words, said he had been finding it very difficult to come closer to his relatives. He said he did not actually understand what was going on until that night.

However, Saffa asked for forgiveness on behalf of his deceased father, which was accepted by the community. A day after the reconciliation ceremony, Saaba section in collaboration with Fambul Tok presented tool kits to Saffa as assistance to empower him in his trade as a trained and qualified carpenter. He has also vowed to help his community in his own way to achieve lasting peace and development.

Solomon Yarjoh is the Communications Director for the Fambul Tok program in Sierra Leone.
View all posts by Solomon Yarjoh →
This entry was posted in From the Ground: Program Updates from Sierra Leone, Pujehun District. Bookmark the permalink.