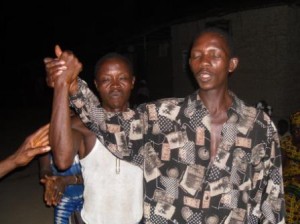 Since the war was declared over in Sierra Leone, B.K (alias ‘laugh to me’) of Madina village, Makari Gbanti chiefdom, Bombali district has been living in constant fear. His fear was that despite the end of hostilities, he was still convinced that he would be confronted by many people because of the role he played during the country’s civil war.

During the Fambul Tok bonfire ceremony in Madina over the weekend, B.K was accused by Ibrahim Kamara of leading gun-wielding rebels to Matoko village to loot property belonging to poor villagers.  Kamara recalled a date in 1998 when he met B.K with rebels. He said they have in their possession looted goods.

“I met him on the way and he told me he was going to see the town chief of Matoko but surprisingly when we met again, it was a different situation as gun toting men were all over the place,” Kamara explained.

Responding to the allegation, B.K carefully narrated his ordeal with the rebels. He said he was captured against his will and forced to lead troops to loot items in nearby villages.

“You all know that during that time people were forced to do things and had I refused I would have been killed,” B.K told his audience.

The two men shook hands after the involvement of Fambul Tok reconciliation committee members that prevailed on both men to see themselves as brothers once again and turn a new page.

Solomon Yarjoh is the Communications Director for the Fambul Tok program in Sierra Leone.
View all posts by Solomon Yarjoh →
This entry was posted in Bombali District, From the Ground: Program Updates from Sierra Leone, Updates by District and tagged Bombali district, ceremony in Madina. Bookmark the permalink.