Rolling out in Koinadugu — beginning with consultations

Koinadugu District (in the north of Sierra Leone) is in the initial phase of the rollout of the Fambul Tok program — community consultation. Before we initiate any Fambul Tok activity, we broadly consult the people and ask them if they want us to facilitate the program in their respective communities. We are rooted in the consultative process — we do not go into a community and impose our program on them. Consultation creates the space for local ownership. 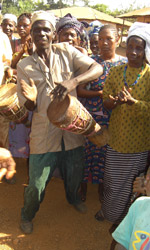 In mid January, staff from the FTI corporate headquarters office in Portland, ME (USA) — FTI President Libby Hoffman, and Director of Finance, Tammy Mazza — accompanied the Koinadugu district staff and national support staff to several communities in Koinadugu. The first community we visited, Koinadugu Village (same name as the district), was surprised but delighted with the Fambul Tok concept. Many elders and representatives expressed gratitude for the program and for its approach. They welcomed us with traditional dances, songs, and Woronanie (the giving of four kola nuts in water to visitors — it’s a sign of appreciation). Koinadugu Village was severely affected during the war, as were most communities in the district. It was a base for RUF, government, and eventually the junta. The atrocities that occurred in the village are unimaginable. The community is really looking forward to the implementation of the program. They expressed a strong desire to reconcile with each other and to come together as a family again, and an excitement about reviving their culture and traditions in support of that process. 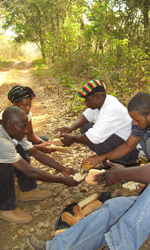 The second community we visited, Firarawa village, presented a slightly different experience. Although they expressed interest in Fambul Tok, they also clearly had some misconceptions about our approach.  They were used to handouts from the international community, and it was obvious they had an initial expectation that the Fambul Tok program would work along those lines.  The team worked hard to explain the Fambul Tok values and approach and to emphasize the importance of community ownership and full participation.

When you consult with people and communities, you will learn a lot about their needs and in return help build confidence in their abilities. The two visits were a great contrast for the team on the challenges of reconciling communities. It takes time if the need is to change the mindset of people, but this is simply one other sign of the reality that reconciliation is a process!

John Caulker is the Executive Director of Fambul Tok International.
View all posts by John Caulker →
This entry was posted in From the Ground: Program Updates from Sierra Leone, Koinadugu District and tagged Fambul Tok, Koinadugu. Bookmark the permalink.

2 Responses to Rolling out in Koinadugu — beginning with consultations