Education, they say is a key to success and Peacemothers in Kunduma village, Fiama chiefdom, Kono district are very enthusiastic to ensure that their children are exposed to quality education in that part of the country. 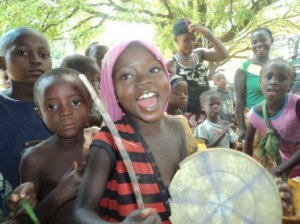 After their harvest last year, Peacemothers met to decide what to do with the crops. They had 15 bags of groundnut and 25 bags of husk rice remaining, and unanimously agreed to sell part of the harvest to pay examination fees for their children who had reached Class 6 and are preparing for the National Primary School Examination in Summer 2013.

A total of ten pupils were selected without discrimination or ethnic boundary. In addition to providing each student with school fees, the women also thought it wise to buy books and other items to boost the children’s achievement. The children, in turn, were very grateful and promised to work hard to pass their examinations.

According to Sia Mani, the new Chairlady of the Peacemothers in Kunduma, women are trying very hard to help their various communities, adding that their roles were earlier restricted to the kitchens but they have proved men wrong that they can also be partners towards nation-building. She disclosed that last year, they were also able to help needy children whose parents could not afford to pay fees to go back to school. “We are doing this because Fambul Tok has assisted us a lot and it is now time to re-plow what we have to help our community,” Mani emphasized.

The only male coordinator of the Peacemothers, Sahr Yarjah, says he is happy to work with women yearning for peace and development. He recounted past years when the group started, adding that community members originally thought the formation of the Peacemothers group was a big joke. He continued to call on his colleagues to work with the group for the development of their community in particular, and the chiefdom as a whole.

One of the student recipients, Sia Komba, expressed happiness for being given support to further her education. She promised that she, along with her classmates, would not let the women down, and they would do everything possible to pass their examinations and continue to junior secondary school.

Meanwhile, Peacemothers will also continue activities they have planned for this year, including swamp rice and groundnut cultivation and their already successful fish trade.

Solomon Yarjoh is the Communications Director for the Fambul Tok program in Sierra Leone.
View all posts by Solomon Yarjoh →
This entry was posted in From the Ground: Program Updates from Sierra Leone, Kono District, Peace Mothers and tagged follow up activities in Kunduma. Bookmark the permalink.