Peace Mothers in Kono , Kailahun, Pujehun and other districts have decided to join the fight against the pandemic COVID 19 that entered the country barely three weeks ago. This is as the result of earlier experiences gained by them during the Ebola epidemic in Sierra Leone in 2014.The epidemic left a negative trail as nearly 4000 lives perished.

During the Ebola fight peace mothers in  some chiefdoms stood  up and ensured the disease did not enter their communities. One of such is Libeisaygahun chiefdom in Bombali district (now Karena district).

Surrounded by a number of Ebola affected chiefdoms, Libeisaygahun was the only chiefdom that did not record a single case. How did one chiefdom, surrounded by other communities with Ebola outbreaks, managed to remain Ebola-free?  Fambul Tok Peace Mothers worked in collaboration with community members to compliment the national effort to eradicate Ebola disease in the country by engaging in house-to-house visits to educate (sensitize) community members.

In Kongbora chiefdom, Moyamba district, Peace mothers sensitized communities on safety methods and encouraged members to abide by the rules and bye laws of the chiefdom. Not a single case was recorded till the end of the crisis. Other peace mothers in Koinadugu, Bombali and other areas also joined in that fight to save their communities.

Initially, Government supplied cakes of soap to communities but some people had the myth (conspiracy theory) that it was infected and if they use them, they would be infected too. They did not trust the Government. Pujehun and Kono Peace Mothers played major roles as they produced sanitized cakes of soap that were supplied to households for hand washing purposes. Every household received a pack of soap. They accepted it in good faith without strings attached to it. 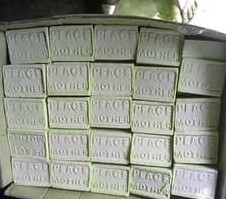 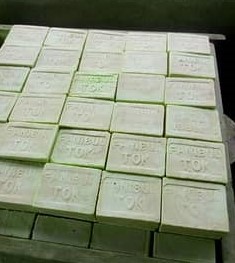 “We have decided to join this fight again as the disease is a pandemic in the world. We have just finished production of over a thousand cakes of sanitized soap to the supplied to households in different parts of the country” says Sia James, Peace Mother chairlady in Woama, Woafeh section in Tankoro, Kono district

In Upper Bambara chiefdom, Kailahun district, Nganyahun section Peace Mothers chairlady, Musu Kanneh, had a lot of experience in soap making. She travelled 17miles off from Pendembu, all the way to Kailahun town to offer her expertise to other Peace Mothers in soap production. Thousands of cakes of soap were produced.

“I know what happened in our chiefdom during the  Ebola epidemic as lots of people got infected because they lacked basic knowledge of hygiene. But through Peace Mothers campaign on safety measures we were able to cut the chain of transmission.  So this time round again Peace Mothers are determined to ensure they join the fight against corona virus.” Madam Kanneh stressed

“ Pemagbe section here in Kpanga Krim chiefdom and Lower Pember in Malen chiefdom produced thousands of cakes of soap that were supplied to communities across the country.  This was achieved through the donation of local soap making machines from Fambul Tok,” she emphasized. She continued, “ We are determined to join the fight against corona disease as we did the last time to help with good hand washing practices”. 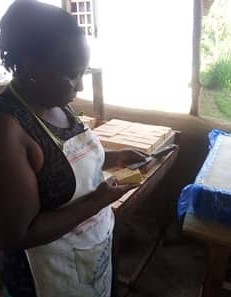 “The entire world should learn from peace mothers especially the role they played in sensitizing communities on safe hand washing and other hygiene practices that helped thousands of community members not to contract the Ebola virus and now the corona pandemic too”, Gbonda emphasized.

Fambul Tok Kailahun team lead, Lucia Brima said that Peace Mothers in different sections will be charged with the responsibility of sensitizing their communities  to protect themselves from getting the corona virus through simple hand washing techniques.  Hand washing and other precautionary measures will help community members  avoid the disease.