Madam Balia Koroma, an active member of the Fambul Tok Peace Mothers’ group in Heremakono section, Wara Wara Yagala chiefdom in Koinadugu district, northern Sierra Leone, has become the first woman to be appointed Acting Section Chief in that part of the country.

Throughout history, women have struggled to attain public leadership positions in Sierra Leone. Unfortunately, in centuries past, it was almost unheard of for women to achieve the title of Paramount chiefs, section chiefs and even town chiefs.

Now, however, Balia Koroma has changed that trend in the history of Koinadugu district. Her appointment was a direct result of her contributions, especially towards women’s empowerment, development of the Heremakono section in particular, and the chiefdom as a whole. 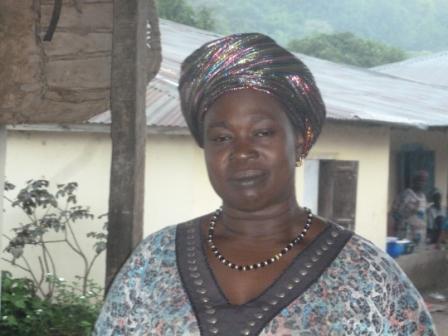 Balia…makes history in the northern province.

Madam Balia has been an outspoken woman for much of her life. She was very influential after the war and urged both local and non-governmental organisations to assist her community.  She is always prepared to challenge decisions that authorities may make that are not in favor of her community or the female population in the district. Her stance against corrupt practices earned her enviable appointments to various committees.

Because of her dedication to civic duty and her contributions to various committees, she was appointed as Acting Section Chief by PC Mansaray with the approval of Chiefdom Committee members. She is also a Tribal Authority that has voting rights in chieftaincy elections in her chiefdom. We congratulate Madam Balia Koroma!

Solomon Yarjoh is the Communications Director for the Fambul Tok program in Sierra Leone.
View all posts by Solomon Yarjoh →
This entry was posted in From the Ground: Program Updates from Sierra Leone, Koinadugu District, Peace Mothers and tagged Follow up on Peace mothers in Heremakono, Koinadugu district, Wara Wara chiefdom. Bookmark the permalink.