Peace Mothers in Paki Masabong section, Paki Masabong chiefdom, Bombali district can now walk tall with their heads up the skies. After just two years of their traditional ceremonies, women in this part of the country organized themselves to launch a microcredit plan. Today, they can now boast of raising the sum of ten million leones. 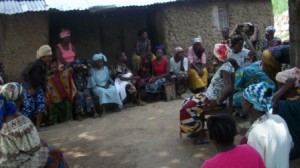 According to the Chairlady of the Peace Mothers in Masabong, Adama Lakkoh, before the intervention of Fambul Tok, no such cooperation existed. She lamented over the activities of organizations that were unable to yield significant results in the past.

The Chairlady enthusiastically stressed the strides Peace Mothers continue to make, adding that since Fambul Tok entered their community, women have learned to develop themselves through various activities. 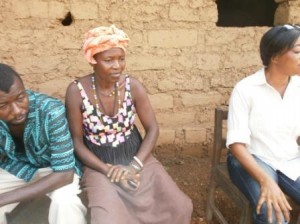 Lakkoh gave a brief history of the success of the women. She explained that after their reconciliation ceremonies two years ago, Fambul Tok initiated the idea of Peace Mothers working together in the spirit of peace and development. She disclosed that it was difficult at the initial stage to call women to meetings, as their numbers were ‘nothing to write home about’. Due to perseverance, however, Lakkoh explained that other women from all 14 villages in the section were strongly convinced that if they worked together in peace and unity, much difference would be realized. 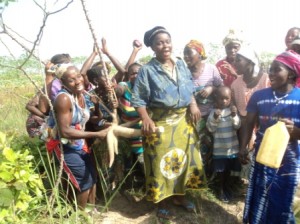 During one of the meetings, the idea of revolving loans was raised and they unanimously agreed to contribute five thousand leones each at the end of the month to be given to one village. Last year, each of the 14 villages had its own share of the loan. There are over 120 women in the group.

Meanwhile, Peace Mothers in Masabong are planning to write more proposals to support a number of activities they hope to embark on in the future.

Solomon Yarjoh is the Communications Director for the Fambul Tok program in Sierra Leone.
View all posts by Solomon Yarjoh →
This entry was posted in Bombali District, From the Ground: Program Updates from Sierra Leone, Peace Mothers, Updates by District and tagged peace mothers activities in Masabong. Bookmark the permalink.