Adama addresses her colleagues during the meeting

The Chairlady of the Fambul Tok Peace Mothers in Masabong section, Paki Masabong chiefdom, Bombali district in the north of Sierra Leone, during their regularly monthly meeting on June 5, 2014,  proudly announced that their usual revolving loan scheme will amount to 20,300,000 Leones in July, 2014.

Giving this update during a Peace Mothers meeting in Makuna village, Adama Lakkoh was very much optimistic about the projected amount, adding that each of the 14  villages will receive 1,265,000 Leones to embark on commercial activities.

In an overview of the loan scheme, Madam Lakkoh said it all started on August 5, 2011 after the Fambul Tok reconciliation ceremonies in their section. She said women in that section had never worked or formed any groups together, but through Fambul Tok they immediately called a meeting and discussed how they could collaborate. 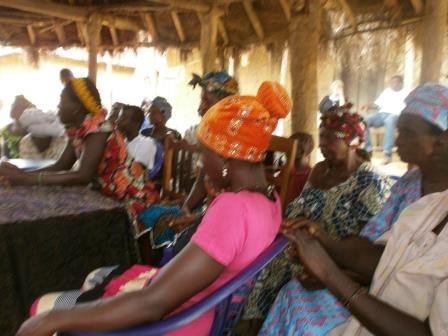 During the inaugural meeting in August 2011, each of the women in the 14 villages agreed to embark on revolving loan scheme. Each member was tasked to pay 5,000 Leones  at the end of every month. She explained that the seed money was re-distributed with little interest among members in their different villages to embark on small scale activities.

“Every month we meet in any of the 14 villages to collect the money and after verify our records we re-distribute it among members” says Lakkoh.

Because of the Peace Mother’s hard work, Fambul Tok, through funds from US State Department, provided a brand new rice mill for the Peace Mothers in Masabong. An oversight committee has already been set to monitor the process. During the meeting the Peace Mothers agreed to embark on store building project and in-valley swamp cultivation for this year’s farming season.

Today, after just 4 years, the women could now boost to millions of Leones with funds generated by themselves without external support. This shows that working together as a unit yields more dividends and promote development rapidly.

Solomon Yarjoh is the Communications Director for the Fambul Tok program in Sierra Leone.
View all posts by Solomon Yarjoh →
This entry was posted in Bombali District, From the Ground: Program Updates from Sierra Leone, Peace Mothers and tagged peace mothers in Masabong section. Bookmark the permalink.