The people of Koinadugu district have unanimously agreed to rebuild their various chiefdoms in the Post-Ebola era.  Koinadugu learned from the bold steps taken by the people of Kailahun District to eradicate Ebola and ensure that the disease does not re-occur any longer.  They are determined to heal and recover from the damages left by the dreadful disease in communities. 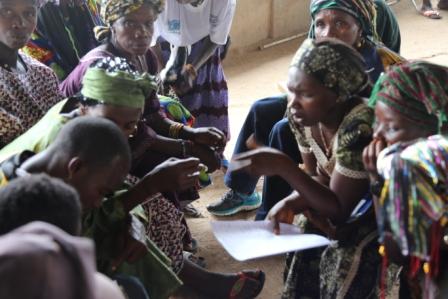 A community preparedness meeting facilitated by Fambul Tok in Yiffin section, Nieni chiefdom, was held on August 10, 2015.  Community members highlighted the debilitating effects of Ebola in the chiefdom, in particular, and the entire district as a whole.

The meeting provided space for frank discussions to beat back the Ebola virus and prepare, in the event of future disasters, through collected commitments to withstand and respond immediately.  It also made room for suggestions and proper planning for Post-Ebola healing and recovery. 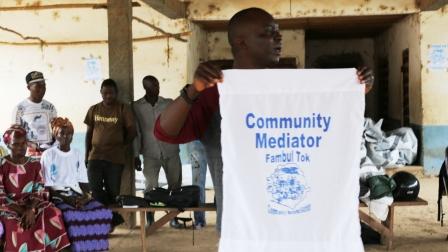 A banner to show where a mediator stays

In his remarks at the meeting, Executive Director of Fambul Tok, John Caulker says the civil war in the Sierra Leone and Ebola are both two major wars for the fact that they caused a lot of atrocities on lives and property.  He stressed that the only difference between the two wars is that Ebola is in one way or the other spread by people very close to you (loved ones) while the civil war was fought by enemies.

He went on to state that after the war those that should have benefited in post war recovery were either not targeted or were not part of the planning and implementation stages.  He said due to these mistakes hundreds of community projects were not completed and therefore did not yield any dividend.

The Director says Fambul Tok’s primary focus in the on-going Post-Ebola phase is for the country to correct those mistakes made after the war when millions of dollars from donors and partners were donated but no tangible outputs were realized. 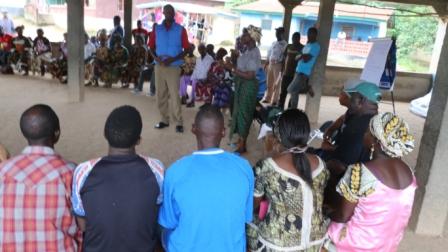 one of women leaders welcomes participants

He says in order to avert such things, Fambul Tok has already engaged communities in Kissi Teng chiefdom, Kailahun district, where the ebola virus first hit.  Through community meetings and trainings in every village, in all five sections, the communities developed narrative on what/how they want to heal and recover from damages caused by Ebola. 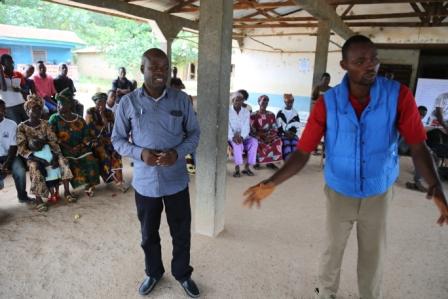 Mr. Caulker says after series of meetings in all sections, the people of Kissi Teng were able to put together the People’s Plan for Ebola prevention, healing and recovery, a community driven approach for Post-Ebola recovery.  He says the Kissi Teng document is only a pilot phase as other chiefdoms in Kailahun district would have the opportunity to do the same provided organizations are willing to take up the task.

Mr. Caulker discloses that similar engagements are now on-going in all five sections in Nieni chiefdom so that communities could easily identify their problems before, during and after Ebola and put in place strategies for the community healing process and recovery.  He asked participants three major questions:  1.  How does as an individual ensure that Ebola does not come again to your community?  2.  How do communities collectively ensure that Ebola does not re-emerge?  3.  Are there Ebola related cases and what do they intend doing to heal and recover in the Post-Ebola phase?  The 108 participants were divided into five groups to answer the questions.

The Director emphasizes on the importance of the second meetings for the sections as community.  Mediators (two from each village, male and female) would be trained in communication skills, mediation, healing and reconciliation and accountability.  He said after those engagements Fambul Tok, in collaboration with other organizations in Koinadugu district, will organize a district community resilience conference in Kabala and community members will also take part.  The conference, he says will look at the Nieni chiefdom People’s Plan for Ebola prevention, healing and recovery.

In his contribution, Councilor Augustine Koroma expressed happiness for Fambul Tok for embarking on Post-Ebola drive.  He confessed that they, as politicians, are accused of receiving money for Ebola work.  He says there are lots of misconceptions on Ebola in that part of the country and therefore called on Fambul Tok to intervene.

Pa Kelly of Funbakoro confirmed that there are lots of people who are not on speaking terms because of Ebola related cases.  He says due to this the chiefdom keeps regressing.

The people of Nieni also complained of Ebola food supplies and called for intervention.  The distribution, according to them targets only survivors or relatives of Ebola victims.

According to one of the elders, everyone in the district suffered in one way or the other so therefore everyone is a survivor.

Another meeting was also held in Siradu section in the same chiefdom.  The training of mediators in the two sections will commence in the next two weeks.  Sectional executive members are expected to be elected during training sessions who will be charged with the responsibility of coordinating activities in their various sections.  Rotational meetings at village level are also expected.

Solomon Yarjoh is the Communications Director for the Fambul Tok program in Sierra Leone.
View all posts by Solomon Yarjoh →
This entry was posted in Ebola response, From the Ground: Program Updates from Sierra Leone, Koinadugu District and tagged Community preparedness meeting in Yiffin. Bookmark the permalink.