Kissi Teng Prepares to be Involved in Post-Ebola Activities

After the cessation of hostilities and the declaration of the end of Sierra Leone’s civil war, many organizations implemented community projects in various parts of the country.  Despite millions of dollars from international donors and partners to the country for post-war activities almost all projects collapsed because they had no sustainability plan. 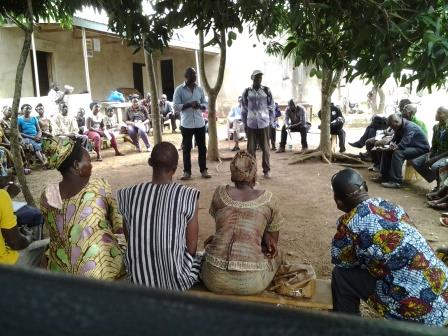 One of the factors that led to the collapse of many projects was the non-inclusion of community members who are beneficiaries.  A number of affected communities were not actively involved at planning stages so that they could be part and parcel, and even plan better, for the sustenance of those projects.

Based on these negative factors, and in order to avert such mistakes in post-Ebola activities, Fambul Tok International-Sierra Leone has started organizing community meetings in readiness to resolve potential conflicts that have already happened or are about to happen in communities.  These meetings create space for community members to explain how they were affected by the Ebola virus and how they can work as individuals, or collectively, to ensure that the disease does not re-emerge. 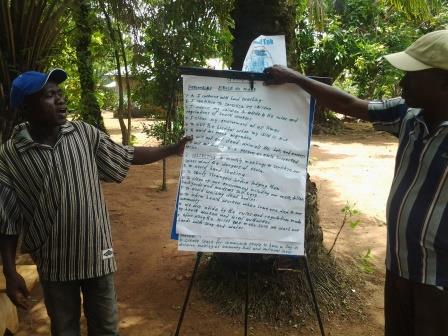 Kissi Teng chiefdom, Kailahun registered the index case on May 25, 2014.  Within three months over 140 people were affected.  With more than 160 days of no new infection in the entire district, the people of Kissi Teng are now grappling with post-Ebola conflicts and challenges.  Given the destruction caused by the virus in the district, the community is determined to ensure that the virus does not re-enter their community again.

On April 21, 2015, Representatives from all 14 villages in the Toli section, Kissi Teng convened in Koindu town to highlight issues and challenges relating to post-Ebola.  They unanimously agreed that there are a lot of issues and there is need for the section to come together to resolve them.  As a result, the Representatives went back to their villages to hold meetings with their people to highlight the most important issues and work together to determine how the community can resolve them.

On April 27, 2015, a follow-up meeting was held in Koindu town allowing the Representatives to come back together as a group, after meeting with their villages.  They catalogued several issues affecting the villages and suggested solutions to the numerous problems.  During discussions, Toli section pointed out some key solutions that should be part of post-Ebola activities such as loan/community grants, agriculture and sectional memorial service for the dead, especially Ebola related deaths.

John Caulker, Executive Director of Fambul Tok International Sierra Leone, pointed out lapses in project implementation after the war. He said most of those projects had no sustainability plan, and attributed the lapses to the lack of involvement of community beneficiaries.  He said Fambul Tok deems it fit to intervene and work to avert mistakes as were evident in post war projects.  Communities know their problems and can identify or suggest solutions and post-Ebola efforts should avoid bringing in projects that have no future for beneficiaries.  Mr. Caulker emphasized that Fambul Tok does not give out money to communities but creates space for healing and reconciliation.

In addition to supporting its healing process, Mr. Caulker went on to say that Fambul Tok will link communities with potential development partners and ensure that whatever comes in goes straight to beneficiaries.

Donald Koroma, the Kailahun District Council representative, stated the Council’s devolved functions, adding that most people do not know how Council works. It was clear that most remote communities do not know what functions Kailahun District Council plays but with enough explanation from its representative the people were exuberant to channel their concerns through the Council.

Another meeting was also held in Konio section in Kissi Teng chiefdom were similar things were discussed.

Toli section now has an executive to coordinate the affairs of the section.

Solomon Yarjoh is the Communications Director for the Fambul Tok program in Sierra Leone.
View all posts by Solomon Yarjoh →
This entry was posted in Ebola response, From the Ground: Program Updates from Sierra Leone, Kailahun District and tagged Post ebola activities in Kissi Teng. Bookmark the permalink.