Before the restructuring,we had a preparedness meeting in  Kaponpon which is the sectional headquarter town of Kaponpon section.The section chief welcome Fambul Tok staff members and said that on behalf of his people and himself they were happy that Fambul Tok has never forgotten about Kaponpon even though there has been long silence between the Kaponpon community and Fambul Tok,but they are happy that the organization is back to start from wher they stopped years back.

He said,’ I want Fambul Tok to know that the men of Kaponpon are more than ready to support our women any way we can to foster development in this community’.In the meeting issues affecting the peace mothers were discussed. Some of them include the long time absence of Fambul Tok staff members from their community and lack of support including financial,material and moral support from Fambul Tok as an organization.

The chairlady Fatmata Koroma thanked Fambul Tok team for their timely intervention in their community.She said since the organization entered Kaponpon community,things have changed for the better.The disunity and conflict which used to be amongst members of the community,especially the women,have been put to rest and all the women are now working as one  to foster peace and development in Kaponpon community.

She commended Fambul Tok for their commitment in establishing peace and development in the country as a whole.According to the chairlady,the issues discussed above were some of the reasons why the peace mothers in Kaponpon were dormant for so long.

The peace mothers coordinator of Fambul Tok,Hawa Conteh apologized to the peace mothers on behalf of the organization and the entire community for the break in communications and support.The Coordinator told members that,’the situation was beyond the control of Fambul Tok but we hope and pray that we will continue the good work and you the pece mothers will never stop doing the good things you have learnt from us even if Fambul Tok is not around.

Madam Conteh said Fambul Tok believes in the adage that before you keep hunting for someone,its better you show him or her how to hunt for themselves,so that they will keep on doing it on their own and not depending totally on the help of others.In other words the people should continue their developmental activities and not wait for the help of government or developing partners to foster development in their community.The way forward was discussed by both the peace mothers and the Fambul Tok team

Fambul Tok Valesius Kamara talked to the peace mothers on the reason and importance of restructuring the group.He pointed out some of the easons why the various groups were dormant,which  included relocation of members,lack of selflessness,disillusion of some members etc.

In addition,Lucinda Kelly admonished the group to select or re-elect people who will seek the interest of everyone.She adviced them to be role models and also indicated that peace mothers should not be fully involved in partisan politics and should work to maintain peace and development in their community

The peace mothers re-elected their former executive to serve the gruop with one additional female to serve as the Secretary general.This happened because in the formation of the then executive they were unable to have a female to serve in that capacity,so a male teacher was elected as a  Secretary.During the restructuring a lady who was a teacher and also part of Kaponpon community emerged as record taker and recorded proceedings of the day.She was already acting as the Secretary and that was how her name came up to be  Secretary to be assisted by the former secretary.The peace mothers of Kaponpon in Wara Wara Bafodia chiefdom restructuring took place on February 14,2020. 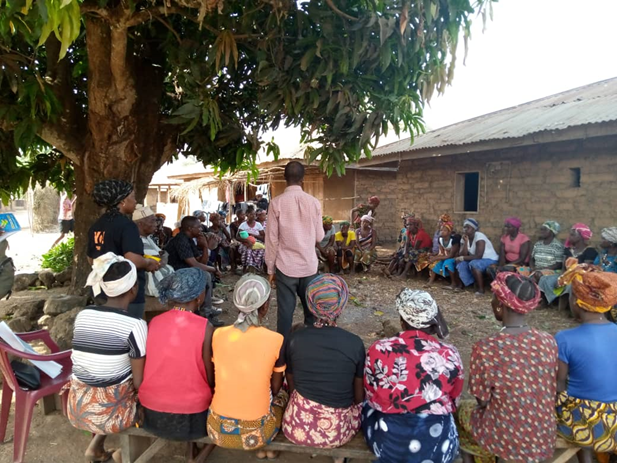 Fambul Tok Issa Kamara thanked everyone present  for their efforts to make the meeting a success.Peace mothers treated themselves to light refreshment for their new executives and re-union with the Fambul Tok team.The meeting ended with traditional singing and dancing

Solomon Yarjoh is the Communications Director for the Fambul Tok program in Sierra Leone.
View all posts by Solomon Yarjoh →
This entry was posted in From the Ground: Program Updates from Sierra Leone, Koinadugu District, Peace Mothers and tagged Peace mothers restructured. Bookmark the permalink.