Editor’s note: Veronica Geretz, a Masters student at the Kroc School of Peace Studies at the University of San Diego, is interning with Fambul Tok in Sierra Leone for the summer. She will be sharing her observations and experiences through occasional blog posts.  Welcome to the Fambul, Veronica!

I am sitting at a worn desk in the convent that we stay in when we are in Kailahun Town.  It is the gateway community to much of the villages in Kailahun District so we’ve passed through and slept here a few nights and taken a couple of hours of rest during some particularly hot and humid days.  It has acquired a feeling of home where we can hand wash a few clothes and leave them to dry on the string with gobs of biting ants that infest our clothes which I make sure and shake off harshly before I fold them, check our email with the Zain wireless USB, take a nap, take a bucket ‘shower’, and grab some chop from the Chief’s wife – who has prepared most of the meals we’ve eaten while here – Kahlee Gwoma (thank God in Mende, one of the main local dialects here in Kailahun).  Unfortunately, I haven’t met her yet to thank her.  I’ve learned that it is customary law that locals do not eat with strangers because there have been locals who literally follow visitors around so that they can mooch off the shared plate that is delivered to the visitor.  Not meeting everyone who has so graciously and on short notice given up her/his cozy bed is tough to get used to.  Again, I’ve been given the largest most comfortable bed in the village, usually the chief’s or one of the chief’s wives – they’ve many.  I still attempt to inquire whose place I am staying in but usually get the, “Pimoi, don’t worry about that”, response.  Bohkhu Bike-ah (many thanks in Mende – I am not sure how everything is spelled and for the sake of my speaking growth like to write some words phonetically) is what I say when I’ve got the chance to meet my gracious sister or brother.   Speaking of chief’s wives, I was given the name Gumanya (Goo-mon-yah) by Bomaru villagers a few nights ago.  Amidst the consultation we were conducting.  Gumanya means “Section Wife” – essentially the momma queen.  Flattering.

The purpose of our village visits, which take the form of what I’ve learned to call Listening Tours, is to engage with the rural villages up line and touch 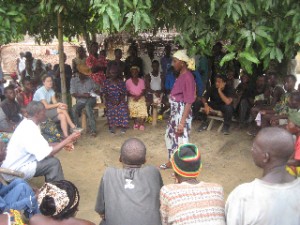 base with them in terms of their progress on the peace initiatives they aspired for the last time Fambul Tok had visited.  We, the National Staff of Fambul Tok, along with representatives from the District Staff, try to make it out to each community a few times/year.  This is a huge task as the ‘roads’ are outrageously rugged to get out here and it takes a long time to travel short distances.  Not to mention there are ‘bridges’ every so often that we cross where we all hold our breath.  Luckily, Mustapha, our trusty driver, is an amazing navigator and the Land Rover we’re driving is an impressive machine.  I cannot believe the beatings it has taken and it is still chugging strong.  Bomaru was the first village that the war came to in the first rounds of RUF (Revolutionary United Front) sieges in March of 1991.  It is only a few miles, if that, from the Sierra Leone/Liberia border.  Lucy, the head of the Peace Mothers in Bomaru, quickly befriended me and after she prepared our evening meal that we all enjoy together, she shared a bit of her experience of the war with me.  She has six children and was widowed during the civil war; she doesn’t know what happened to her husband.  She speaks English with a gentle, wise demeanor.  When the rebels came, she fled with her family into the bush to hide and when she returned saw the brutality and viciousness of the RUF.  Thirteen villagers were murdered and around fifteen were injured or wounded.  Lucy asked me to not forget her, and to go back and share with my friends and family that I visited where the war first began in Sierra Leone.  I won’t forget.

There is a powerful war memorial that is a two-story gazebo acknowledging the loss of precious life.  The top floor of the gazebo offers a breathtaking panorama of the mountainous rain forest surrounding the village.  In the afternoon I went atop and took in the memorial and the view by practicing a bit of meditation and yoga. 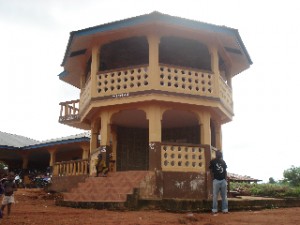 Once I began active yoga, a few pee-kin (children) came up and joined me as I practiced a few basic poses.  They giggled as they exhaled heavily to simulate what the strange white woman in front of them was doing.  However, they did do all of the poses and had enormous smiles on their faces when we finished.  In order to get as many villages in as possible, we’ve been arising with the crow of the roosters around the villages.  In order to catch as much of the community as possible we have to arrive in the early morning before many of them head to the Community Farms (one of the four main, community owned initiatives that Fambul Tok supports and keeps up with) or in the late evening once they’ve arrived back from the farms.  I don’t mind arising early as the mist over the forest and swooping over the huts in the villages is truly mystifying.  This morning we traveled to Nyadeyama.  We had to get out of the Rover and walk about 2 miles through the bush along a footpath to reach the quintessential West African village.  The population is maybe thirty.  With about twenty of the thirty being women and children.  We first greet the chief and other elders that may approach us.  Then we sit down on the chairs or benches they offer us as we wait for the rest of the community to gather around.  Our visits are sporadic to villages and although some actually have cell phones (the juxtaposition of little to no development yet access to technology is curious and thought provoking), very few do have cell phones or anyway for us to forecast our arrival.  There were about ten huts made of mud, branches, and straw.  There was a woman tossing a bushel of palm fruit with a young girl besides her picking through the mound below.  There were a few women with a child on their backs cooking under the hut/kitchen in the center of the small village.  A young boy, maybe nineteen years old, greets us as he speaks Krio well and very broken English.  He calls for the chief who comes to meet us and we sit at the benches while everyone gathers.  The children are always bewildered by the ghostliness of my skin and just stare at me.  If I try to hold one or speak to them they often get scared – quite frustrating.  Naturally, it would take more than an hour or two to feel comfortable with a completely foreign individual as a child; I don’t blame them.  The district staff representative leads the meeting/consultation/dialogue by thanking them for having us and asking the pastor or imam to open the dialogue with a prayer.  I’ve been taking in the time to praise the divine and been able to join in ‘Our Fathers’ a few times now.  The Muslim prayers are so incredibly beautiful as the entire village opens their hands in front of them as they send their praise to Allah and the soft harmony of the chant becomes a concerto.   The district rep. then asks a few questions to the community pertaining to Fambul Tok, peace, and reconciliation.  Then the floor is opened up to the community.  We thank them for their time again and encourage the work they’re engaging in.  Borku baika.  Next we are headed to the Monthly Staff Meeting in Moyamba.

John Caulker is the Executive Director of Fambul Tok International.
View all posts by John Caulker →
This entry was posted in From the Ground: Program Updates from Sierra Leone, Kailahun District, Updates by District and tagged Fambul Tok, Kailahun. Bookmark the permalink.

One Response to Kailahun District Visitation – May 21-29