On February 13, 2013, people gathered in chairs under a grove of trees on the outskirts of Kailahun town, the capital city of Kailahun District, to talk about Fambul Tok in their district, in a virtual repeat of the scene from 5 years earlier, when stakeholders from across the district gathered for one of the first Fambul Tok consultations (this conversation is featured in the Fambul Tok film).  At that time, John Caulker and his staff asked those gathered if they wanted to reconcile (the response was an enthusiastic Yes), and if so – how they wanted to do it?  The groundwork was laid for launching Fambul Tok in Kailahun, which became the pilot district for the implementation of the Fambul Tok program in 2008. 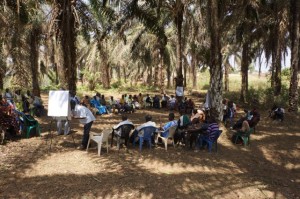 Now, Now, five years later, over 50 people again gathered in chairs under a grove of trees, for another consultation.  This time, however, each person represented a section (or group of 4-10 villages) where Fambul Tok had been actively working—hosting a bonfire ceremony and ongoing follow-up activities.  People from the represented sections told of village members vibrantly engaging in development projects together for the betterment of their communities and virtually all reported using the FT structures to peacefully resolve new conflicts as they emerge.

55 people, 55 villages – 5 years of deep reconciliation leading to individual and community healing.  The depth of experience represented was staggering to me, and I felt a wave of recognition of this visible symbol of how much had been accomplished.  Having just arrived for a 2-week visit to Sierra Leone (more stories to come…stay tuned!), I felt the substance and tone of the meetings was an auspicious way to begin my visit!  Hearkening back to the parallel scene of 5 years earlier made it so vividly obvious how much knowledge was represented in the group; how much transformation and healing of wounds; how much reknitting of communities; how much lived goodness. 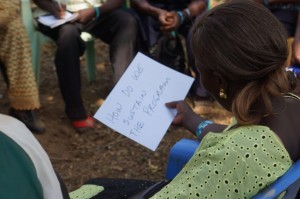 Planning for sustainability in Kailahun District

These 55 were gathered to initiate another first for Fambul Tok – the process of a district taking over the full running of the Fambul Tok program at the district level.  Eager to take the program forward fully on their own, the representatives gathered talked through the process of how to do that.  They decided to work toward establishing Fambul Tok as a district NGO, newly christened “Kailahun District Fambul Tok,” or KD-FT.   Delegates decided to divide the district into 4 zones, and they proceeded to elect zonal executive bodies (with equal numbers of men and women) to manage the ongoing work of Fambul Tok on the ground for Kailahun.  From those zonal bodies, one overarching District Executive was elected, to be the governing body for the whole district.

PC Gondor and Chief Ndolleh arrive at the meeting

Paramount Chief Cyril Foray Gondor, who was elected to Chair the new District Executive at the meeting, described the district as ready to take on the responsibility for continuing the expansion of FT across the district, and for ensuring the deepening of the work in the communities where it was already working.  “We must hold Fambul Tok with two hands,” Chief Gondor said.  “We must see it as like a child, our child,” he said.  He emphasized the importance of the district itself fully owning the program, and really making the Fambul Tok work sustainable in the district.  Most important in that process, he noted, would be capacity building for those in the district, to help support them being able to manage the work effectively, transparently, and fully according to the Fambul Tok values.

The national organization (FT-SL) will still retain close ties with the new district organization, supporting and overseeing KD-FT as it gets established – “walking with” (to use Fambul Tok’s language) the new Executive through the year as it builds the administrative structure, practices and knowledge to carry forward the work on its own. 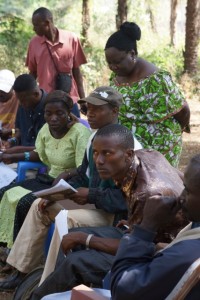 “The last five years were Fambul Tok Volume I,” said Chief Maada Alpha Ndolleh, the town chief of Kailahun Town and founding District Chairman of Fambul Tok there, who will continue an active leadership role in the district work.  “Now, we have Fambul Tok, Volume II,” he concluded.

A spirit of energy and commitment was evident everywhere. “Let’s embrace it now, as our own pikin, [Krio for child]” exhorted one delegate.  Several speakers talked about the importance of working  hard, and of people volunteering their time.  And many delegates noted how women were flourishing in the fambul tok process, recognizing how the future of their country depended on this continuing. Many noted how in a lot of the Fambul Tok follow up activities, especially the farms, women were outperforming the men.  “The women should lead us,” one man said, while another young man said, “The youth are ready to support the women.”  A requirement for gender balance on the executives will support this going forward. 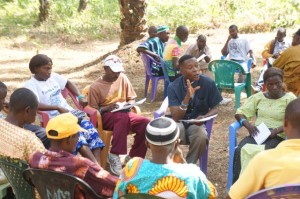 Delegates recognized the work ahead, but expressed a universal eagerness to embrace it.  “Let’s take the values that Fambul Tok taught us,” said local journalist and active Fambul Tok supporter James Fallah, “and go forward as one.”

Libby Hoffman is the President of Catalyst for Peace, Producer of Fambul Tok (the film), and a co-founder of the Fambul Tok program.
View all posts by Libby Hoffman →
This entry was posted in From the Ground: Program Updates from Sierra Leone, Kailahun District, Updates by District. Bookmark the permalink.