It’s All About the Values

Like most organizations, Fambul Tok has a list of values to which it subscribes, and that it works to consistently fulfill.  Unlike many organizations in practice, however, it defines the living out of those values as one of the, if not the defining characteristic of its work.
Living its values (and helping Fambul Tok communities live them), in other words, IS the work of Fambul Tok.  Seeing this exemplified in vivid ways was one of the highlights of my February trip to Sierra Leone. 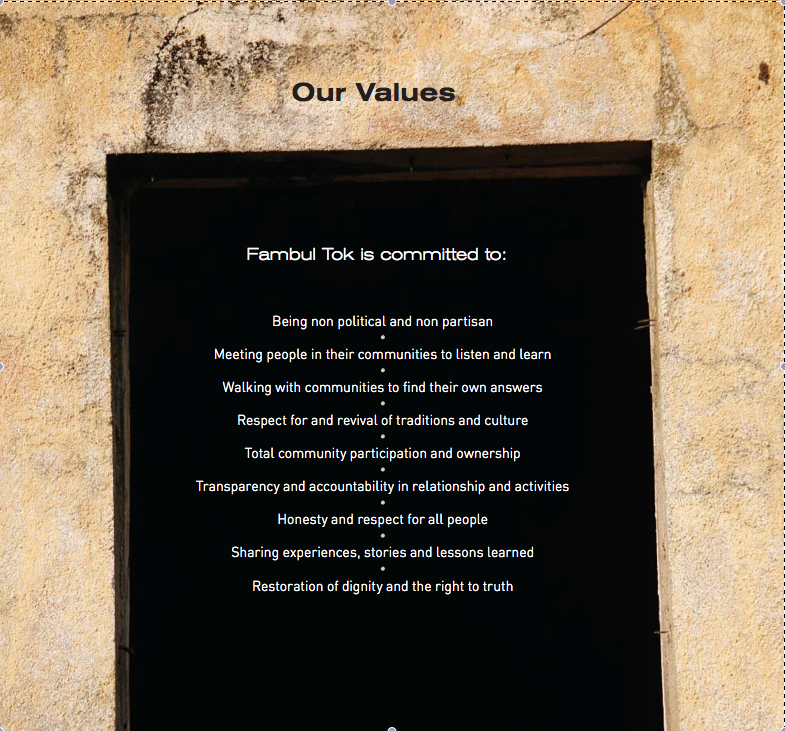 What does living and inculcating values look like in practice?  Every community meeting begins with an articulation of those values, and they become the criteria for participation in the meeting itself.  Fambul Tok’s first listed value is being non partisan and non political.  So leadership positions (organizationally and in the volunteer structures that are put in place for the community work itself) are reserved for those without explicit party affiliations.  In a highly polarized society like Sierra Leone, this is critical to creating local structures in which all citizens feel they can fully participate.  Clear and vigorous commitment to this value has protected the work from being hijacked for political purposes on many an occasion.  In the first “Stakeholders Meetings” in Pujehun district, which I was able to attend in 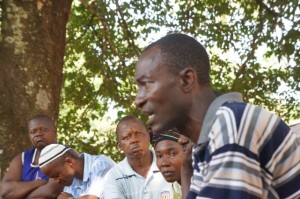 February (a Stakeholders Meeting is first step in Fambul Tok’s work in a new section, gathering the leaders of all the villages in that section to first share about Fambul Tok), you could watch the faces of the community members relax into the safety of that value, as the Fambul Tok staff explained the centrality of keeping the work fully separate from politics.

Given the core commitment to the work being owned and led by the communities themselves, and not dictated by Fambul Tok organizationally or other external parties, values which support that process are critical, and these process values are the one thing that does get “dictated” and reinforced by Fambul Tok.  As an example, all voices are considered worthy, and the process is meant to be all-inclusive – everyone is entitled and encouraged to participate. (“Total community participation and ownership,” is how it’s officially listed.)  This gets 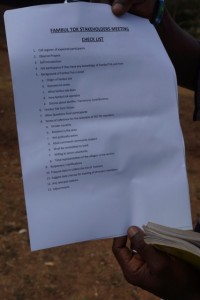 The agenda for a stakeholders meeting

reinforced at many levels, for example in the selection of the sectional Reconciliation and Outreach Committees. Leaders from each village in a section choose members of their communities to represent them in these key Fambul Tok organizing committees.  But if, for example, they appoint someone who has a visible political agenda, or a leader only appoints members of his or her family, they are not approved by the FT staff, and the community will be sent back to the drawing board to appoint more truly representative people.

“Total participation” means full inclusion of women in all decision making structures as well, a requirement that has needed frequent reinforcement, given how much it challenges current culture.  Eventually, however, communities become self-reinforcing with this standard, with women either freely speaking or with the community members themselves inviting women who have remained silent in a meeting to speak, without having to wait for a FT staff member to do so.  Reinforcing the requirement for gender equity in the community structures challenges and reshapes tradition, and the impact is extending now beyond the Fambul Tok structures, as communities more broadly recognize the value and important leadership role of women.  For example, staff from Moyamba District shared that in 7 chiefdoms women had not been allowed to attend meetings where men were in attendance.  Because of Fambul Tok, that has now changed, and women are now going to all meetings.  The cultural norm that Fambul Tok establishes has spread outside of the FT context.

This same value of total participation is bearing fruit in other powerfully healing ways for individuals and communities.  In one notable example, 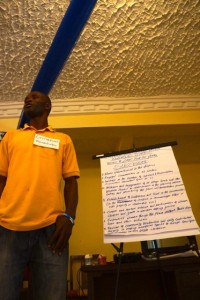 Koinadugu district staff member Reverend Emmanuel Mansaray shared a story from a recent bonfire in Kambamamuduya Section.  A man from that section had been captured and tortured by the rebels during the war, and was forced to kill his mother-in-law.  At the end of the war, he returned to his village and his wife, telling her simply that the rebels had killed her mother, but not admitting his own role.  Upon his return, he gradually slipped into insanity. He was rejected by all in his community and labeled as the town crazy, wandering the village and refusing even basic personal grooming.  At the village’s bonfire ceremony, when he stepped forward wanting to testify, several community members tried to prevent him, citing his insanity.  FT staff, however, insisting on the value of inclusiveness, made sure he had the opportunity to come forward.

He stood up and in his testimony admitted to being the one who had killed his wife’s father.  He had never told anyone before that he had in fact done so, and the guilt from that event had obviously so plagued him.  After testifying, he was forgiven by his wife and community, and he literally became a changed man – his sanity returned, and he resumed a productive role in his community – after they had collectively gathered and taken him to the river to bathe!

With so many of visibly insane people walking the streets of Freetown, or other, smaller communities in the country, many staff speculate that such unacknowledged guilt and trauma from the war may play a significant role in that.  At the February staff meeting, they began considering if there were a way to reach that population more systematically.

Libby Hoffman is the President of Catalyst for Peace, Producer of Fambul Tok (the film), and a co-founder of the Fambul Tok program.
View all posts by Libby Hoffman →
This entry was posted in From the Ground: Program Updates from Sierra Leone, Koinadugu District, Moyamba District, Organization, Reflections, Updates by District and tagged ceremonies, Fambul Tok, Koinadugu, Moyamba, values. Bookmark the permalink.