All is not lost in the midst of ebola crisis in Sierra Leone.  Fambul Tok Peace Mothers from Masabong section, Paki Masabong chiefdom in Bombali district is one of hundreds of Peace Mothers’ groups that is proving this to the world.

Despite the outbreak of the ebola disease in the country, coupled with restrictions on movement and community by-laws, Peace Mothers in that part of the country stood firm to ensure that their micro revolving loan program, spanning across fourteen villages, would continue to operate.

Aware of the restrictions on movement of people from one village to the other and of restrictions on public gatherings, the Peace Mother’s were forced to strategize on how to collect their monthly contributions. They appointed trustees among them that go around to collect contributions and re-deploy cash to all members in the fourteen villages. This solution made collection easier and cost effective.

“In the midst of ebola, we were able to do our activities,” says Adama Lakkoh, the chairwoman of the group.  She added that even though the disease affects the country direct and indirectly, they worked together and were able to accumulate a sum of Le23 million (approximately $5,300) as seed money from and for the loan program.

She continued, “We have also collected six bags of rice as proceeds from the rice mill and we are very much appreciative to the US State department in Sierra Leone for providing the funds through Fambul Tok.” 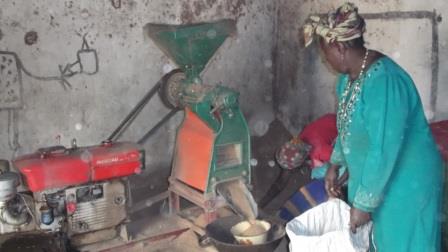 Solomon Yarjoh is the Communications Director for the Fambul Tok program in Sierra Leone.
View all posts by Solomon Yarjoh →
This entry was posted in Bombali District, From the Ground: Program Updates from Sierra Leone, Peace Mothers and tagged Peace mothers in Masabong. Bookmark the permalink.