This post was written by team members in Koinadugu District.

Had it not been the timely intervention of Peace Mothers in Heremakono section, Gbenekoro village, Sengbe chiefdom in Koinadugu district, two pupils of the Ahmadiyya Agricultural Secondary School and Loma Secondary School in Kabala would have dropped out of school. 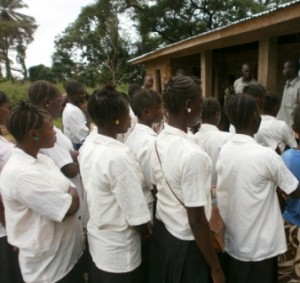 Students wait outside their school in Kabala, Koinadugu District.

Tenneh Dabo and Mariama Marah could not afford to pay school fees because their parents were killed during the war.

According to the chairlady of Peace Mothers in Gbenekoro, Pesi Mansaray, pupils, especially orphans, have been struggling to get education. She says at the beginning of every academic year, several students drop out of school because they are unable to pay school charges. She discloses that it has reached an alarming rate and is very appalling as girls that have dropped from the school system have no option but to marry against their will.

This year, the Peace Mothers decided to do something to assist children in their community. Both Tenneh and Mariama who almost dropped out of school during the peak of their external exams were rescued by Peace mothers.

How did they do that? According to Pesi Mansaray, every member of the group was asked to voluntarily contribute whatever she had. Like something pre-arranged in less than a day they were able to raise the sum of Le150,000 (35 dollars) as school fee for the two pupils.

The hope of both Tenneh and Mariama to get quality education has been restored as they continue schooling once again.

However Madam Mansaray called on humanitarian organizations to assist pupils,especially those without parents.

She says “We have started and we want to help more this year provided we  have funds from our farming activities.”

Gbenekoro is one Fambul Tok’s communities that is striving hard to be self-reliant and help push the reconciliation process ahead. The Peace Mothers’ group can now boast of some funds that they are using to do farming and to buy rice from other areas so they can sell to their community in case there is a crisis.