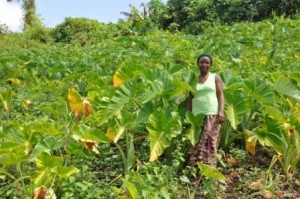 Peace mothers chairlady in Faada in front of the cocoa garden

The idea of piloting fish farming in  Kono, Moyamba and Koinadugu districts by Fambul Tok was a result of earlier district consultations held with Peace Mothers. Through interactive discussions, the Peace Mothers debated different ways in which to embark on development activities in their various communities.

During these sessions, two promising leads emerged — the introduction of a micro-credit scheme, and the reliability of the fish trade. Fambul Tok, however, had observed in the past that other organisations had attempted to introduced microcredit programs to community-based groups who later encountered difficulty in the repayment process. 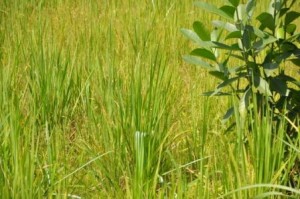 Fambul Tok did not outwardly discourage the idea of micro-credit proposed by the Peace Mothers, but instead expressed reservations regarding the sustainability of the whole process. Fambul Tok them handed the challenge over to the women to start the ball rolling, allowing the Peace Mothers of Masabong section in Paki Masabong chiefdom, Bombali district to establish their own micro-credit program. Today,they can boast of over three million Leones in income (approximately $690 USD)!

As a way to empower rural women in Sierra Leone in accordance with this year’s  International Women’s Day (the theme was Empower Rural Women – End Hunger and Poverty) Fambul Tok, with financial support from Catalyst for Peace and the Tides Foundation in the United States, offered assistance to three districts -Kono, Koinadugu and Moyamba to pilot the fish farming project.

As a follow up assessment to gauge the progress of the fish farming project in Kono district, beneficiary communities were visited. In Faada, Bayakor section, Gbense chiefdom, one of the beneficiary communities of the fish farrming has collected huge sums of money from sales. They have also agreed to continue the fish business through the dry season because of the rains. For now, their intention is to buy bags of rice from fish proceeds to be sold to community members to assist with farming. They have also embarked on their own micro-credit scheme and all villages (Bendu, Kamadu, Seidu and Faada) are cooperating. 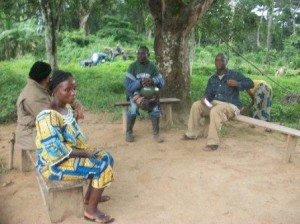 Preparing for a meeting in Kunduma-Kono

In Yigbeda, Gbogboafeh section, Nimikoro chiefdom, Peace Mothers have collected nearly Le500,000 and after resolution have earned a small profit. The women have an upland rice farm and there is already a nursery to be transplanted to the swamp once the young rice plants mature.

Kunduma, Fiama section in Fiama chiefdom is also a beneficiary, and after selling their first tranche of fish, Peace Mothers unanimously agreed to buy fish in Koidu town, the district headquarters town of Kono. The women started off with one carton and after two months, they doubled their holdings.

Because of the determination of Peace Mothers in Kunduma to forge ahead, Peace Mothers in Jagbwema, the chiefdom headquarter town of Fiama chiefdom, also thought it wise to introduce the fish trade, even though they were not part of the pilot phase. Today their trade is booming as they now buy two cartons of fish from Koidu town on a regular basis.

Solomon Yarjoh is the Communications Director for the Fambul Tok program in Sierra Leone.
View all posts by Solomon Yarjoh →
This entry was posted in From the Ground: Program Updates from Sierra Leone, Koinadugu District, Kono District, Moyamba District, Organization and tagged Fish farming, Peace Mothers. Bookmark the permalink.