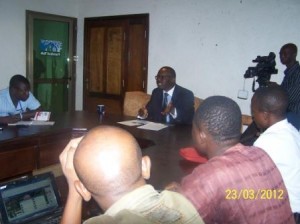 Addressing a press conference on Thursday March 22, 2012 prior to the day’s commemoration, Fambul Tok Executive Director John Caulker, said that the clarion call to commemorate March 23rd had earlier been re-echoed by stakeholders who think that the government should set aside this day for Sierra Leoneans to reflect on what happened during the war and how they can work to forestall the recurrences of what most believe to be the saddest chapter in the history of the country.

“As we commemorate another anniversary on 23rd March, 2012, we urge Sierra Leoneans to reflect on what happened during the war. Why Sierra Leone went down that path of destruction,” says John Caulker.

“March 23rd is connected to every Sierra Leonean, either directly or indirectly as the rebel conflict in the country touched everyone irrespective of ethnic or political affiliations. Therefore, never again shall we take weapons against each other to destroy our beloved country. We should sit together, dialogue and put the sad chapter behind us,” the Executive Director emphasized. 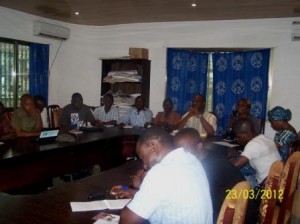 Attendees of the press conference listen to John Caulker's remarks

Caulker explained that as Sierra Leoneans go to the polls on November 17, 2012 to vote for their councilors, council chairmen, parliamentarians and President for the next five years, Fambul Tok urges all Sierra Leoneans to exercise their franchise peacefully without violence.

“The 2012 elections are not far away; therefore we are calling on all Sierra Leoneans to make a commitment and ensure violent free elections. Let us see ourselves as brothers and sisters irrespective of our different political backgrounds (wi na wan fambul-we are one family),” he stressed.

He went on to tell journalists that violence is still happening, referencing the political violence that has been plaguing the country for the past couple of months. The issues that originally led the country to war are still around, Caulker observed, stating that March 23rd can be used to prevent recurrences of violence, noting that people can use this day to reflect as to what happened and also create space for wrongdoers to apologize to their victims.

Solomon Yarjoh is the Communications Director for the Fambul Tok program in Sierra Leone.
View all posts by Solomon Yarjoh →
This entry was posted in From the Ground: Program Updates from Sierra Leone, Organization, Recognition, Reflections and tagged Fambul Tok, Wi Na Wan Fambul. Bookmark the permalink.