Most people in the rural parts of Sierra Leone are poor and find it very difficult to afford basic necessities such as food, shelter, clothing and medical facilities. With the outbreak of ebola in the country, these communities are unable to acquire costly materials such as hand sanitizers, disinfectants  and other items to protect them from contracting the deadly ebola virus. 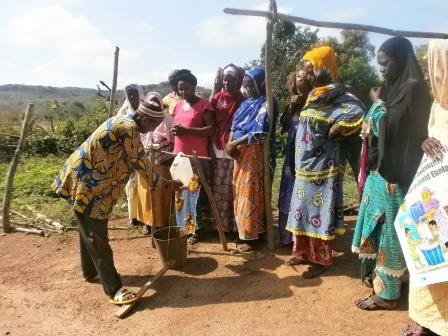 Mr. Jalloh demonstrates the use of the tap

One of the senior community members in Dogoloya section, Folosaba Dembelia chiefdom in Koinadugu district thought of a local initiative to help protect his community against ebola through a safe hand washing method. Mohamed Jalloh erected what he referred to as local tap for hand washing. He used local resources. The tap is made out of used gallon-sized plastic containers with strings tied at the top and side to allow them hang on a tree branch suspended on two poles. The rope at the side of the containers is also tied to a small log used as a pedal to allow a user step on it and for water to be poured from the suspended container through a hole at its side. Soap is also hung adjacent to the containers so that one can easily use it wash hands by stepping on the pedal without touching the containers.

This local and cost effective initiative is promoted by Fambul Tok district staff. Many communities have inculcated the idea and have erected taps for hand washing method. Some communities that have erected the taps include Largo in Folosaba Dembelia chiefdom, Koinadugu and Yiriah sections in Sengbe, Kongbelefeh and Sokurella sections in Diang, and Firawa and Yiffin in Nieni chiefdom where the ebola virus broke out in the Koinadugu district.

Meanwhile the whole Nieni chiefdom has been quarantined.

To complement the efforts of the Sierra Leone government to fight the ebola disease, Fambul Tok through support from US State Department continues to provide locally sanitized soap, t-shirts and posters for community sensitization on frequent hand washing campaign. 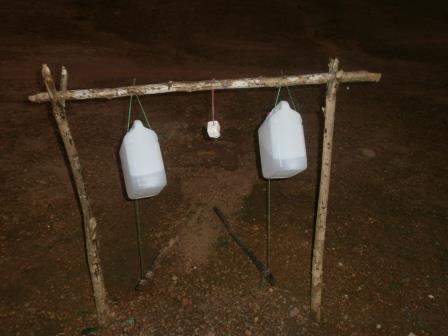 Solomon Yarjoh is the Communications Director for the Fambul Tok program in Sierra Leone.
View all posts by Solomon Yarjoh →
This entry was posted in Ebola response, From the Ground: Program Updates from Sierra Leone, Koinadugu District and tagged local initiative on hand washing. Bookmark the permalink.