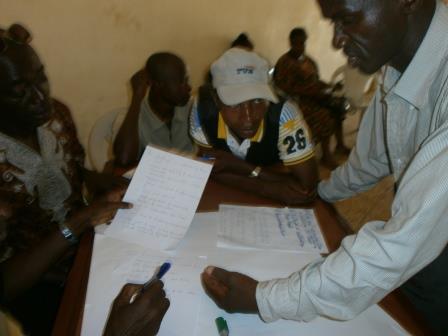 Councilors strategize how to tackle Ebola in Kailahun

Fambul Tok International-Sierra Leone, in a effort to complement governmental aide and other partners’ work to contain the Ebola disease in the country, has intensified activities focusing on Ebola education in different communities.

Sierra Leone is under a 90 day state of emergency  on public health. Because of restrictions associated with this declaration, movement to epicenters, where Ebola medical facilities are located, is especially difficult in places where the disease has hit. To increase knowledge in the country, Fambul Tok recently produced a  jingle  on Ebola in different local languages. The jingle outlines prevention, care and the role of the community during the Ebola crisis. The jingle is now aired on various community radio stations in the country. In addition to the jingle, radio programs on Ebola are held weekly in all districts. These programs give update to the community not only on Fambul Tok activities, but also on the Ebola disease. The jingle and radio programs have helped communities to know how to prevent Ebola, where to go and their roles in the fight against the disease. 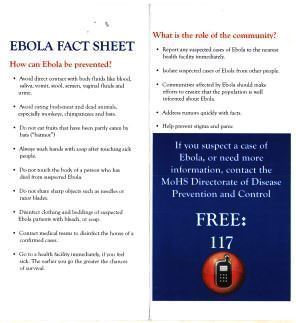 Fambul Tok staff  continue to collaborate with agencies and community-based organizations to monitor the situation in the country. District staff are invited to District Health Management Team meetings on a weekly basis to get updates from health officials.

One of the communities that has taken the lead in house-to-house sensitization is Gorama-Kono chiefdom in Kono district. Peace Mothers in Kangama have stepped up efforts to sensitize their womenfolks and the rest of the villages on the virulent disease of Ebola. Focusing on community efforts is essential, as the community has a role to play by reporting any suspected cases of Ebola to the nearest health facility immediately.

Other Peace Mothers have taken the lead in this drive as they embark on house to house sensitization. However the Peace Mothers cannot work in huge numbers, because large gatherings are not currently allowed.

As some people still hold the view that the disease does not exist, community members are making efforts to ensure that the people, especially in the rural areas, are well informed about Ebola, thereby mitigating unnecessary rumors and myths.

Solomon Yarjoh is the Communications Director for the Fambul Tok program in Sierra Leone.
View all posts by Solomon Yarjoh →
This entry was posted in From the Ground: Program Updates from Sierra Leone, Recognition and tagged Fambul Tok intervention in ebola fight. Bookmark the permalink.