The fight against ebola is not over yet, despite the decreased number of new ebola cases in Sierra Leone.  Many social issues and conflicts continue to emerge in communities as a result of ebola.  The issues range from the compromise of by-laws by traditional leaders to non-acceptance and discrimination of survivors in their communities.

Fambul Tok International-Sierra Leone (FTI-SL) has already started engaging community members to put things in place to address conflicts and other related issues that may have the propensity to destabilize peace in the country.

FTI-SL strongly believes in consultations with communities and used this approach over the weekend to bring together representatives from thirteen chiefdoms in Bombali district in the Northern regional district headquarter town of Makeni.

Giving an overview of the consultative approach, Executive Director of FTI-SL, John Caulker emphasized the rationale behind such gathering. He stated that Fambul Tok does not work in isolation, adding that consulting communities on what they, the communities themselves, would want to do after ebola is vital because communities can identify their own challenges and how to overcome them.  Mr. Caulker said discussions would be focused on identifying conflicts and how communities could work together to address the conflicts and social impact during and after ebola. 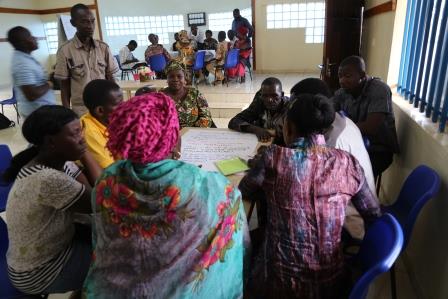 During the discussions, chiefdom representatives highlighted a number of  issues in their respective chiefdoms. An example of one such conflict identified is the strained relationship between Paki Masabong and Bombali Sebora chiefdoms.  The strain is the result of a community member from Paki Masabong accused of being the source in spreading the disease to Bombali Sebora.

Another chiefdom representative explained that there is a problem between community members in the Sanda Tendaren chiefdom and the health workers.  This conflict arose from inaccurate testing results; the result of a lab test on a person whose first test result showed positive while the second turned out negative.  This led to violent confrontations that attracted the attention of higher authorities.

According to a report from Rosanda in Paki Masabong chiefdom there was confrontation between community members and contact tracers in relation to routine testing. The communities resisted the continuation of taking temperatures at noon as they have the notion that testing at mid day affects results.

A conflict that was highlighted by almost all chiefdom representations had to do with by-laws. Traditional leaders are widely thought to be favoring some people while others are fined. Stigmatization of ebola survivors and the increase in teenage pregnancy were also vital issues mentioned.

Similar consultations will be held in other districts.

Solomon Yarjoh is the Communications Director for the Fambul Tok program in Sierra Leone.
View all posts by Solomon Yarjoh →
This entry was posted in Bombali District, Ebola response, From the Ground: Program Updates from Sierra Leone and tagged consultations in Bombali. Bookmark the permalink.