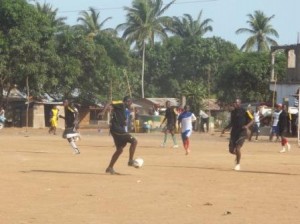 One of the male teams in action

The Civil Society Platform on non-violence, which consist of Fambul Tok, the Campaign for Good Governance and the Sierra Leone Youth Empowerment Organisation has showcased what many people described as a step in the right direction towards tolerance and a violent-free pre- and post-2012 elections in Sierra Leone.

For the past three weeks, the Platform has continued to engage stakeholders and ex-combatants (now known as Peace Parents) to sensitize the Waterloo community on political tolerance and non-violence. It started with series of activities including a workshop to educate the community on various topics relating to non-violence and the promotion of peace. One of the tools at the helm of its activities is football, as it serves as a unifying program to bring people together. 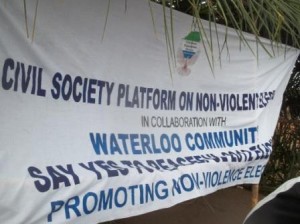 Series of football matches have been held at the Bassa town field in Waterloo where members of the platform preached peace and non-violence. The Peace Parents who have either been neglected or marginalized because of the role they played during the war also   convinced their colleagues to come on board and join the campaign.

According to Sahr Kendema of the Campaign for Good Governance, the group submitted a project proposal to the United Nations Office in Sierra Leone, in hopes of receiving funding to launch a campaign with the intention to mobilize and engage ex-combatants and community stakeholders on non-violence. He said the Platform has had several high spirited interactions with the now transformed peace parents and they succeeded in educating, sensitizing and even informing them about the essence of peaceful elections in the country and the vices that surround violent activities before, during, and after elections. 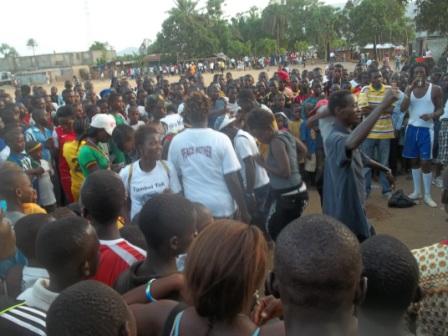 Preaching peace and non-violence in Waterloo

“The goal of the project is to strengthen civil society engagement towards achieving free, fair and credible elections in Sierra Leone by fostering political tolerance and non-violence among the various political parties in the country,” stressed Sheku Koroma of Fambul Tok.

He says most of the people are young men and by using football as a tool will bring people from all works of life together and encourage participating teams to be tolerant of each other and serve as Ambassadors to promote peace throughout the country.

Field Coordinator of the campaign, Mohamed Savage, encouraged his colleagues to be a part of the non-violence initiative, adding that for far too long, young men have been viewed as trouble-shooters. He assured the group that nothing will distract them to engage in violence during and after the 2012 elections. 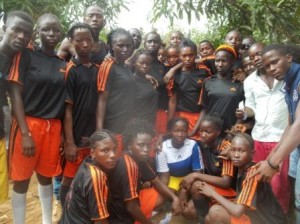 Savage disclosed that May 19, 2012 was earmarked for distribution of prizes to all participating teams — there are no winners or losers, as the games are geared toward peace.

Solomon Yarjoh is the Communications Director for the Fambul Tok program in Sierra Leone.
View all posts by Solomon Yarjoh →
This entry was posted in From the Ground: Program Updates from Sierra Leone, Organization and tagged Non-violence campaign in Waterloo. Bookmark the permalink.