As a complement to the efforts of the Government of Sierra Leone in the fight to eliminate Ebola in the country, Fambul Tok International-Sierra Leone has handed over a brand new soap making machine to Peace Mothers in Woafeh section, Tankoro chiefdom in Kono district. 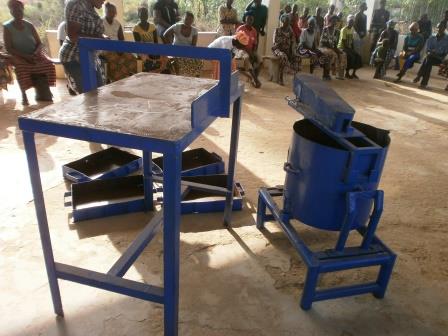 Formally presenting the machine on December 20, 2014, Director of Peace Mothers, Fambul Tok Micheala Ashwood, underscored the active roles of Sierra Leonean women in every sphere of life. She mentioned that Peace Mothers continue to play different roles towards the development of the country, citing the example of the 2012 non-violence campaign.

Ashwood says Peace Mothers in Fambul Tok operational sections in all six districts in October 2014 started house-to-house campaign aiming at frequent hand washing as a simple behavioral change to reduce the rate of morality of infectious diseases such as Ebola.

Ashwood reflects that Kono district is very strategic, adding that over the months the Ebola virus has affected people in that part of the country greatly. She expresses thanks and appreciation to the US Department for State for supporting the Peace Mothers, especially at this crucial time. Ashwood adds that while Pujehun initially produced and supplied other districts with soap, but because of where Pujehun is located, Fambul Tok decided to donate the machine to Kono to ease production and distribution to other areas. 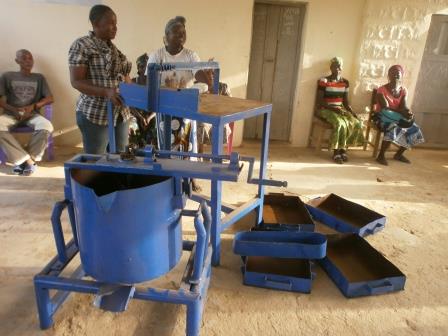 Lilian hands over machine to Chairlady of Peace Mothers

Fambul Tok’s Kono District Team leader, Lilian Morsay implored women to make use of the machine, stressing it was not meant for Tankoro chiefdom alone, but for the whole district, as Peace Mothers would be producing sanitized soap to be supplied to other areas to facilitate frequent hand washing. She also emphasized that if they use the machine judiciously, it would generate income for women to be self-reliant.

Chairlady of the Peace Mothers in Woafeh section, Sia James, was full of appreciation to Fambul Tok, confessing that they were surprised. She assured that it would be used for its intended purpose.

Solomon Yarjoh is the Communications Director for the Fambul Tok program in Sierra Leone.
View all posts by Solomon Yarjoh →
This entry was posted in Ebola response, From the Ground: Program Updates from Sierra Leone, Kono District, Peace Mothers and tagged Donation to peace mothers in Kono district. Bookmark the permalink.