Fambul Tok book to be used by Universities

While addressing the crowd at the October 6, 2011 launch of the Fambul Tok book held at the British Council auditorium in Freetwon, Madam Memunatu Pratt, Head of Peace and Conflict Studies at Fourah Bay College, University of Sierra Leone lauded the efforts of Fambul Tok International to facilitate and promote peace building. She continued to emphasize the benefit that the newly launched Fambul Tok book could provide to students studying peace and conflict studies in universities. 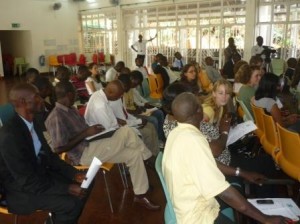 Audience at book launch at British Council in Freetown 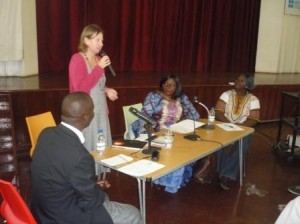 The Director of the British Council in Sierra Leone, Louisa Waddingham, echoed Madam Pratt by commending the work of Fambul Tok and also recommending that academic institutions use the book. Executive Director of Fambul Tok International John Caulker then spoke, acknowledging all those who contributed in diverse ways toward the completion of the book, including the Sierra Leone Commercial Bank and Sierra Rutile for their support in distributing copies of the book to communities in Sierra Leone. He also assured the audience that the book would be made available to the rural communities who have worked so hard to make themselves whole again. 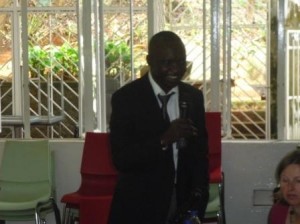 As a complement to the book launch, the 82 minute-long Fambul Tok documentary film was screened with a Question and Answer session afterward. The handsomely produced 144-page book, published by Umbrage Editions, gathers the voices of conflict resolution experts such as Benedict Sannoh, former Sierra Leonean child soldier Ishmael Beah, John Caulker, and Libby Hoffman, the co-founder of Fambul Tok, along with the indelible artistry of the photographs and story documented by journalist Sara Terry to create an unforgettable testimony to the power of forgiveness and reconciliation.

Solomon Yarjoh is the Communications Director for the Fambul Tok program in Sierra Leone.
View all posts by Solomon Yarjoh →
This entry was posted in From the Ground: Program Updates from Sierra Leone, Student Clubs, Education, The Film and Book and tagged Fambul Tok, Fambul Tok book. Bookmark the permalink.