Since March 23, 2008 over thirty Fambul Tok ceremonies have taken place in Kailahun District.

Here is a short explanation of a Fambul Tok ceremony…

The community welcomes the Fambul Tok team and guests with traditional dances and songs until early evening. 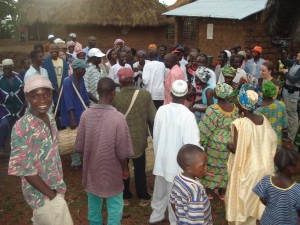 The reconciliation process takes place at night surrounding a bonfire. Following introductions and prayers, victims come forward and tell their stories from the war. Victims, mostly, tell their stories and identify/call the perpetrator, if alive and present, forward to show in front of the community. Perpetrators usually resist identifying themselves; however, the communities waste no time in pointing them out and pushing them into the circle. 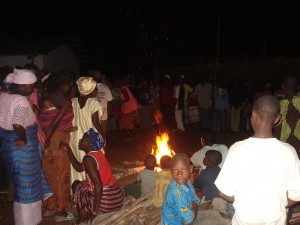 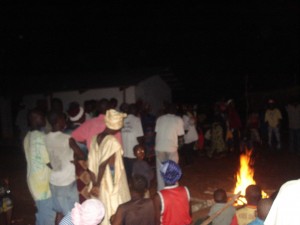 Perpetrators tell their end of side the story to the community and bend down (in a traditional manner) to ask for forgiveness from the victim and community. To reconcile (if the victim accepts to forgive) victim and perpetrator embrace each other while the community sings and dance. The reconciliation ceremony takes place well into the morning.

*One ceremony a perpetrator spoke for nearly 3 hours telling his story from childhood and how he got recruited as a child solider, eventually becoming a body guard to Foday Sankoh.
Day 2

The following morning is the traditional cleansing ceremony. To cleanse the perpetrator/victims, traditional elders’ talk and praise the ancestors at a sacred site (sites and names vary by community).

Fambul Tok team and communities accompany the traditional leaders to the site for the cleansing ritual. After the ritual the communities prepare food for the whole community to eat.

For instance in Bomaru (the first Fambul Tok Ceremony), the site was boulder on top of a small mound. The women and men sat adjacent from one another. Each group played different roles in the ceremony – the women chanted and sang traditional songs, while the men interacted with the ancestors.

To walk around or near the site people had to take off their shoes or sandals. To begin the ceremony, two Senior elders kneeled down on top of a mound in the rock and everyone followed in their location. It was a way to show respect to the ancestors. An elder called the names of heroic ancestors that died to forgive the perpetrators for their crimes and accept the reconciliation between the victims and perpetrators. After a couple of chants and songs to the ancestors, the ritual proceeded into town…

Now the project is growing to address the healing and reconciliation needs of two more districts, including Kailahun. September 23rd was the official launching in Moyamaba District and occurred after a consultation with local leaders and Fambul tok staff.

Here is a preview of the upcoming work…..

Working with Fambul Tok has been an incredible ride and I hope to illustrate it through the blogs. There will be a range of stories coming to you this season — Ceremony stories, behind the scenes preparation, community leaders, Fambul Tok staff travels, quotes, success stories, community farms, reconciliation football tournament, roads, local culture and heritage, and many more. So please stay tune for the upcoming blogs…

One challenge of the Fambul Tok work!!!

John and I recently traveled upline (Krio for provinces) to conduct a community meeting with the Kailahun District Executive committee. The meeting was to inform them on Fambul Tok’s upcoming goals, handover, and our continued commitment to the District. The meeting went well apart from the challenging road conditions. I thought when I left in late July the roads condition could get no worse, but now look! Can you imagine how the people of Kailahun Distirict survive everyday!!!

And another picture of Kailahun roads

The fine roads of Kailahun

John Caulker is the Executive Director of Fambul Tok International.
View all posts by John Caulker →
This entry was posted in From the Ground: Program Updates from Sierra Leone, Kailahun District and tagged ceremonies, Fambul Tok, Kailahun. Bookmark the permalink.