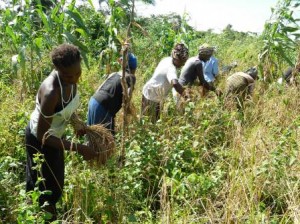 Fambul Tok peace mothers in Kailahun, Kono, Moyamba and Koinadugu districts all give testimonies of bumper harvests of their farms this year. As Fambul Tok walks alongside these groups, they have started realizing more and more of their potential, planning larger farms and using their savings for more income generating projects like starting markets.

The women of Kailahun, a district dubbed to now have “extra” of everything, continues to set the pace of admiration from neighboring Liberia and Guinea.

One of the communities that has demonstrated women can do even better than men is Boroma in the Gbense chiefdom, Kono district. Fambul Tok women in Boroma did not wait for anyone to give them the go ahead so immediately after their ceremonies they asked traditional leaders for a piece of land that was offered to them, to plant a farm. Work kicked off with their  little resources. They faced challenges but that did not stop them from carrying out their purpose.

They had no machetes of theirs  they used to borrow. Guess what, during work hours the items were taken from them. When Fambul Tok came to their aid, they all agreed to use the money judiciously. A carton of fish was bought and shared among them to sell. As the proceeds increased, another carton was added to boom the trade. Today, with their profits, they have decided to build a multi-purpose store in the dry season.

Speaking to the chairlady of the group, she said despite challenges, they planted beans. Sia Korbia went on to state that they have agreed to construct a building to store their harvest. She called on others not to relent but to work as a team to develop themselves.

Meanwhile, Boroma has decided to open a savings account so that they can save enough money to start other projects.

Solomon Yarjoh is the Communications Director for the Fambul Tok program in Sierra Leone.
View all posts by Solomon Yarjoh →
This entry was posted in From the Ground: Program Updates from Sierra Leone, Updates by District and tagged development, Fambul Tok, Kailahun, Koinadugu, Moyamba, Peace Mothers. Bookmark the permalink.