On the evening of March 22, hundreds of people swarmed the town of Bomaru, a small town in the eastern corner of Sierra Leone, near the Liberian border.  They came from all over the district (Kailahun), and indeed all over the country, to watch the African premiere of Fambul Tok. They came on motorcycles, cars, buses and flatbed trucks – whatever vehicles the Fambul Tok staff could rustle up – and on foot from neighboring communities, delaying the start time for the screening till after 10 pm to allow for everyone to arrive. 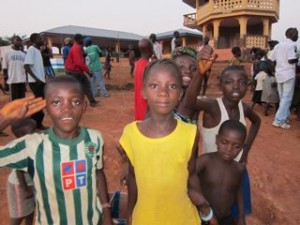 Finally, under a starry sky (the threatening gray clouds had blown over), in a town clearing with chairs and benches packed to capacity and folks seated on the ground or crowds standing on the edges all around, the film began, the significance of the moment apparent to all.

20 years ago exactly, the first rebels had crossed into Bomaru from Liberia to fire the shots that began the 11-year civil war.  Exactly 3 years before, the very spot that now held benches and chairs had been the site of the first Fambul Tok reconciliation bonfire, officially launching the tradition-based community healing process that the documentary film is now helping to share with the world.  The screening on this night marked the first time the people of Kailahun district were seeing their stories, their process, on film.

That the screening in Bomaru was completely different from the film’s US premieres at SXSW in Austin hardly needs noting. Besides the bugs crawling across the screen and the persistent low hum of the generator, or other accompaniments of an outdoor setting like this, there was a constant buzz of conversation throughout the film.  Part of it was people translating the Kono, or Kisse, or English, for their friends who spoke only Mende or Krio.  Part of it was the constant, verbal response to the stories they were witnessing on the screen – whether it was the wrenching scenes of people’s testimonies about what happened to them, or what they did, during the war, or the awe-inspiring expressions of apology and forgiveness that they were seeing on screen for the first time.  In Africa, a film is not something to be experienced quietly I learned – especially one like this.

Sobered by the stories, and the memories they evoked, after the screening there was an opportunity to move into celebrating the hard-won reconciliation that the communities of Kailahun have been working so hard to achieve over the last 3 years.  Renowned musicians Bajah and the Dry Eye Crew, Lady P, and Angie took to the stage for a rousing concert, climaxing with their performance of the new national unity campaign theme song, Wi Na Wan Fambul (We are one family). 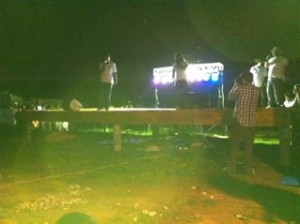 Sahr and Nyumah, whose story is featured early in the film, were there.  The morning after the screening they described their surprise at the comments they were getting – they laughed at being recognized as “stars,” and were slightly wide eyed at the realization that their powerful story of reconciliation was now inspiring others to take courageous steps toward apology and forgiveness.  They realized with pride that they were now teachers for others. 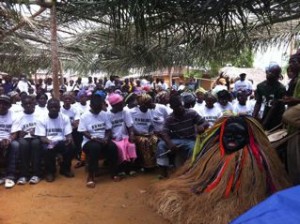 How Sierra Leoneans and their culture were teachers for the world was a theme of the official Wi Na Wan Fambul Campaign Launch the next morning.  Calling for March 23rd to be recognized as a national day of remembrance, Fambul Tok International led a coalition of other civil society groups – including Campaign for Good Governance, Search for Common Ground, and CCYA – in launching the 2-year long campaign, designed to have Sierra Leoneans stories of reconciliation inspire a stranger sense of national unity and support a violence-free national election in 2012.  The campaign will center around screening the film in villages across the country, followed by community dialogues on the issues it raises. 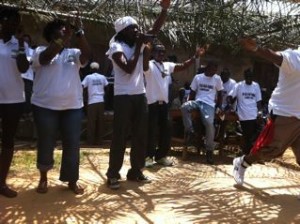 Libby Hoffman is the President of Catalyst for Peace, Producer of Fambul Tok (the film), and a co-founder of the Fambul Tok program.
View all posts by Libby Hoffman →
This entry was posted in From the Ground: Program Updates from Sierra Leone, Kailahun District, The Film and Book and tagged Fambul Tok, film, Kailahun, Wi Na Wan Fambul. Bookmark the permalink.