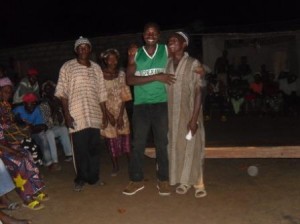 Fofana (center) being embraced by his people

Fambul Tok has expanded to Bombali District in Sierra Leone, and new truth-telling bonfires there have inaugurated several instances of confession, apology and forgiveness.

One of the men who collaborated with the then Armed Forces Revolutionary Council (AFRC) during Sierra Leone’s civil war to loot property belonging to poor villagers has openly apologized to his people and asked for forgiveness. This happened during the Fambul Tok bonfire ceremony in Kagbo village, Safroko Limba chiefdom, Bombali district.

John Fofana, who used to go by the jungle name Johnny Moore, was accused by several villagers of having led members of the defunct AFRC on a looting spree in neighboring villages, carting away foodstuffs, animals and other items.

Testifying at the bonfire, one of the town chiefs accused Fofana of wreaking havoc in several villages, blaming the former junta collaborator for their poverty and present predicament.  Another testifier went on to state that Fofana was always in the midst of the groups that raided villages in the Safroko Limba chiefdom, noting that they as youth had been very uncompromising with Fofana since he was appointed youth leader.

“This is because many people still regard him as an enemy due to atrocities he committed during the war,” says Joseph Kanu. He continued, saying that now that Fambul Tok has shown the value of forgiveness, they are willing and ready to work with him for the development of the community.

Before asking for forgiveness, Fofana told the gathering that it was never his wish to unleash mayhem on his people as he was issued strict instructions by the rebels to loot villages.

“I was constantly being watched and any attempt to escape or act contrary to command would have resulted to my being executed,” he explained.

After his brief testimony, Fofana went down his knees and asked for forgiveness for all the wrongs he did to his people during the war.

The village reconciliation committee of Fambul Tok intervened and asked all those Fofana had wronged to forgive him.  He was forgiven and embraced once more in the community.

Solomon Yarjoh is the Communications Director for the Fambul Tok program in Sierra Leone.
View all posts by Solomon Yarjoh →
This entry was posted in Bombali District, From the Ground: Program Updates from Sierra Leone, Updates by District and tagged ceremonies, ceremony in Bombali. Bookmark the permalink.