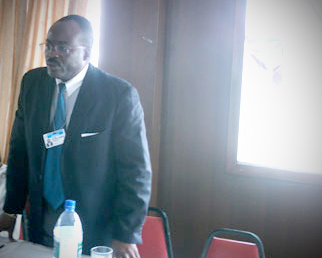 In accepting Fambul Tok International’s invitation to serve on our Advisory Board, Benedict F. Sannoh, Chief Human Rights Officer of the United Nations Mission in Sudan and distinguished lawyer, activist and scholar, noted that the work FTI has done in Sierra Leone “represents the single most significant and constructive contribution to national reconciliation and the overall promotion of peace and stability in Sierra Leone by a non-governmental organization.” As Mr. Sannoh headed the UN Office in Sierra Leone as Chief of the Human Rights Section for several years after the Civil War, his words—and his offer of support—are particularly meaningful.

Mr. Sannoh knows the challenges facing the people of Sierra Leone intimately. “I have followed the work of Fambul Tok over the years,” he recalls, “during my assignment in Freetown as Chief of the Human Rights Section, UNIOSIL/UNIPSIL.” During his six years in Sierra Leone Mr. Sannoh was charged with consolidating the peace by building national capacity for promoting human rights. From establishing a reparations program for victims of the conflict to organizing Human Rights Committees in each of the country’s 12 districts, Mr. Sannoh worked diligently to implement the recommendations of the Truth and Reconciliation Commission (TRC).

It is a sense of work left undone that underlines his enthusiasm for joining Fambul Tok. “The reconciliation mandate of the TRC was not fully implemented,” he explains. And in the consultations, truth telling bonfires and follow-up activities we support, he sees a realization of the objectives he strove for in Sierra Leone.

He also sees the potential of our approach in other post-conflict countries. Prior to his work at the United Nations on behalf of Sudan and Sierra Leone, Mr. Sannoh was a human rights activist with civil society in Liberia, using his practice of the law to sensitize, advocate and litigate on behalf of Liberians. Threatened by the government of Charles Taylor, he fled Liberia in 2002 and was granted political asylum in the United States. “I am confident that the programmes of Fambul Tok will be expanded not only throughout Sierra Leone but perhaps the other countries of the sub-region,” he declares. We are honored that he has chosen to work with us to realize this vision.

In joining our Advisory Board Mr. Sannoh has expressed his conviction that Fambul Tok International is on the right path towards peace. We celebrate his willingness to walk that path with us and, most importantly, with the people of Sierra Leone.