“We are fed up with political violence,” Koinadugu women exclaim | Fambul Tok Blog
Skip to content

“We are fed up with political violence,” Koinadugu women exclaim 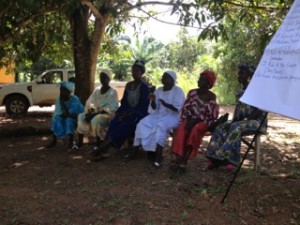 A snapshot of participants in Kabala

The newly trained Community Peace Ambassadors in Koinadugu district, north of Sierra Leone vowed to leave no stone unturned to ensure that the November 17,2012 multi-tier elections in the country were free from violence, intimidation and harassment. 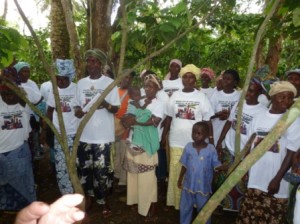 “We are tired of political violence and we will volunteer  our time and efforts to do everything possible to ensure that the elections are free, fair and credible” explained the chairlady of Fambul Tok Peace Mothers in Heremakono, Wara Wara Yagala chiefdom.

During a one-day training in Kabala on Tuesday November 6 ,2012, participants from all eleven chiefdoms in Koinadugu district were extremely grateful to Fambul Tok for organizing such a sensitive training session for rural women in that part of the country.

In her testimony, one of the Community Peace Ambassadors, Mrs.Marah from Mongo chiefdom, gave a brief account of how they were subjected to violence, harassment and intimidation during the 1977 general elections in Sierra Leone. She explained that during that period, politicians used thugs to attack their village and in the process many people fled. Mrs Marah joined the other women to denounce violence and promised that after the training they would continue to work with anyone responsible for the conduct of the elections so that peace would prevail before, during and after the electioneering period.

Another participant, Margaret Mansaray, explained how she prevented chaos in Wara Wara Bafodia chiefdom during the awarding of symbols to candidates. She said through  Fambul Tok’s experience, especially in reconciliation and peace, she swiftly intervened to avert violence during that time.

One of the women in Kabala explained how two candidates contesting for a single Parliamentary symbol in one of the political parties reconciled in the township as the losing candidate who had heard about Fambul Tok reconciliation activities in the district prevailed on his supporters not to fight in the interest of peace, but called on them to vote in the winner. Madam Kadiatu Kamara said they were so impressed that day when the two candidates embraced each other, as everyone thought their supporters would resort to fighting and further violence.

She stressed that Sierra Leone belongs to all of us and went on to denounce violence in any form or shape.

Other participants shared their experience and before the training ended, they all pledged to work hard to ensure the elections were violence-free.

The Community Peace Ambassadors were given posters and T-shirts with peace messages to preach peace in their various communities.

Solomon Yarjoh is the Communications Director for the Fambul Tok program in Sierra Leone.
View all posts by Solomon Yarjoh →
This entry was posted in From the Ground: Program Updates from Sierra Leone, In the News, Koinadugu District and tagged training of Community Peace Ambassadors. Bookmark the permalink.