Journalists will now be reporting better stories on conflict in Sierra Leone and beyond following the recent involvement of Fambul Tok International-Sierra Leone.

Fambul Tok, with support from a conflict-sensitive consortium led by World Vision International in Sierra Leone, organized a two-day conflict-sensitive training session for over forty members of the fourth estate in both electronic and print media across the country. It commenced at the Grassroots Gender Empowerment Movement Hall in Freetown on March 28-29,2012. 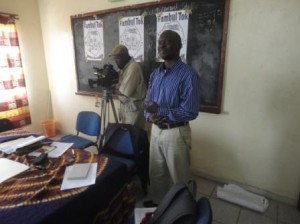 In his remarks at the opening ceremony, the Executive Director of Fambul Tok International-Sierra Leone, John Caulker, said that the training is meant as an orientation for practicing journalists, inspiring them to brainstorm and share experiences, especially when national elections are due to be held in November of this year. Caulker said that members of the media have a crucial role to play in the time leading up to the elections and throughout the electioneering process. He said the role of journalists is critical and therefore warned them to be mindful of how they go about reporting sensitive issues such as religion, elections and other matters, as well as stressing the need for the training, adding that it was geared toward raising awareness and shaping the skills of media practitioners well ahead of the country’s elections.

In his presentation, Mr. Massaquoi condemned what he referred to as ‘fire brigade journalism,’ where journalists only act when there is trouble. He said journalists should report stories that can transform society and help consolidate the peace process in Sierra Leone, emphasizing that the media has the ability to transform and also influence society.

Mr. Nicol mentioned the role of the media in peace building, as it plays a vital role in strengthening the prospect of peace and weakening the chances of renewed violence. He touched on the overall goal of peacebuilding to enhance the capacity of the society to manage conflict without violence.

The lead person of this conflict-sensitive consortium, Fred Goba of World Vision, stated that media personnel play a vital role in society, adding that the consortium deemed it fit to train journalists on pertinent issues. 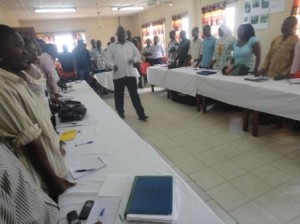 The journalists were then divided into three groups and given different case studies.

Group one identified political issues, power strikes, deaths and migration as problems affecting the community. The group proffered solutions to the various issues raised, including:

— The law should not be taken into one’s own hands.

— Investigations should be allowed to go on independently.

— Human rights should be observed, especially that of equality before the law.

— Democratic principles must be observed.

— The existence of unity in diversity should be maintained and honored.

— Progress should be the ultimate goal of development.

Group two critically examined religious issues in the community. Some of the issues highlighted were hate speech and religious tolerance. The group gave a number of solutions to address the situation, and according to the Independent Media Commission there should be:

Group three carefully looked at a variety of issues, such as:

— The dangers of exclusion from decision-making processes

As solutions, the group, however, suggested that in order to bring peace to the community, it is crucial to:

— Check and monitor the rehabilitation package

The training concluded with the presentation of certificates to participants by Search for Common Ground Country Director and member of Talking Drum Studios in Sierra Leone, Ambrose James.

In response to recent criticism of this training, Fambul Tok International – Sierra Leone issued a press release, which can be read here.

Solomon Yarjoh is the Communications Director for the Fambul Tok program in Sierra Leone.
View all posts by Solomon Yarjoh →
This entry was posted in From the Ground: Program Updates from Sierra Leone, In the News, Organization. Bookmark the permalink.