Peace Mothers in Kunduma village, Fiama chiefdom, Kono district have planned to increase assistance to school-going children in their community, raising the number of children receiving aid from 15 last year to 30.

The disclosure was recently announced by the Assistant Chairlady of Peace Mothers in Kunduma, Gladys Ngegbanda. According to Ms. Ngegbanda, the Peace Mothers initiated a new program to assist members of the community who were unable to pay the school fees for their children. She explained that, with Fambul Tok support, they cultivated acres of land and after huge harvests, some of the crops were sold and an agreement was reached to use the proceeds to assist children that had been driven out of school due to their family’s inability to afford their school fees.

She disclosed that 15 children benefited and, at the end of the year, those who were assisted were all promoted to different classes. She went on to state that this year, they are expanding to target 30 children.

“We want to continue the scheme every year so that our children will not be forced to drop out of school for non-payment of fees,” said another member of the Peace Mothers.

Regarding their fish trade endeavor, launched with support from Fambul Tok, Ms. Ngegbanda told reporters that the women buy two cartons of fish from Koidu town every month to sell to the community, adding that they plan on buying in large quantities in Shenge after the rainy season.

The chairman of Fambul Tok community farm in Kunduma, Tamba Yarjah, provided a brief background of the farm’s activities, stating that they have already started brushing their farm and the community intends to plant rice in the near future. “We are grateful to God for the yields last year. We have divided the proceeds into two; one part will be used as seeds and the rest will be sold so we can assist community members,” Yarjah disclosed. 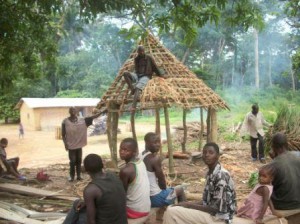 The Town Chief of Kunduma, Tamba Fennyaquee, elaborated on just how much Fambul Tok has done to bring his community together, saying that “Since the reconciliation ceremony, my people now settle minor disputes among themselves without taking court actions. As I talk to you, I’m the happiest man because my people no longer bother me with complains as it used to be.”

To show their appreciation to one of the men who assisted them in making farm tools free of cost, the chief said they have resolved to construct a blacksmith house for Yei Lebbie, popularly known as Marcus. Marcus responded by saying that although he canot work on the farm, he still plays a very big role towards the community.

Solomon Yarjoh is the Communications Director for the Fambul Tok program in Sierra Leone.
View all posts by Solomon Yarjoh →
This entry was posted in From the Ground: Program Updates from Sierra Leone, In the News, Kono District and tagged Follow up on peace mothers activities, follow-up activities. Bookmark the permalink.