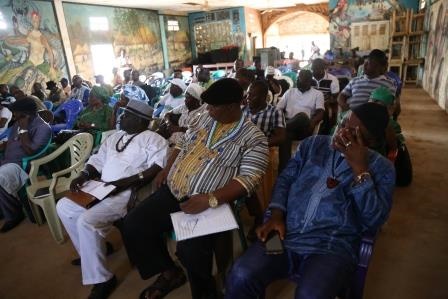 A cross section of Paramount Chiefs

The Inclusive District Peace and Development Committee members, after independent investigations found out that the sad situation is responsible for the many challenges and without delay a date was set to bring local authorities and Councilors together.The meeting was held in Pendembu where both parties  discussed issues and suggested solutions to them.The Pendembu meeting was successful as it laid firm foundation for peace and the beginining of  cooperation to raise the much needed own source revenue

After the Pendembu meeting,the Paramount Chiefs set a date for their usual monthly meeting in Daru.The IDPDC used the opportunity to facilitate the process and invited Councilors to that meeting to resolve the issue of revenue generation 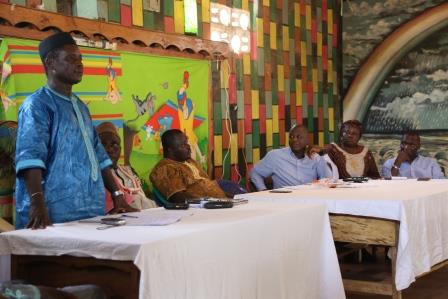 In the Daru meeting over the weekend,stakeholders  including Councilors,Paramount Chiefs and Community members  unanimously agreed to collaborate and jointly collect revenue for the development of chiefdoms .It was a family meeting as both Councilors and tradional leaders mingled with each other.

In his remarks,District Officer Kailahun,Gadiru Kabba emphasized the need for effective revenue collection for the development of the district.He said in the interest of peace the people of Kailahun have to work together to harmonize revenue collection.

Executive Director,Fambul Tok International-Sierra Leone said the issue of revenue collection in Kailahun has been very thorny especially when both Council and Local authorities accused each other of non- compliance.

He said both parties should strategize effectively to work together and raise revenue for the development of the district.

Chairman,Kailahun District Council,Alex Bhonapha appreciated the efforts of Fambul Tok for its tremendous work to bring Councilors and local authorities together to discuss pertinent issues on revenue generation. 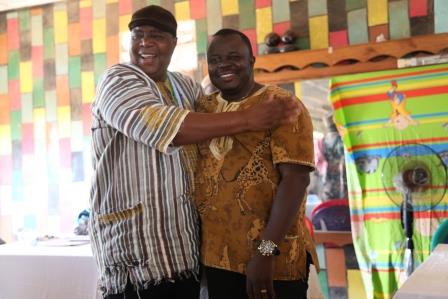 He said over the past two years there have been lots of issues especially dealing with revenue generation.He stated that the framers of the local government Act of 2004 did not cascade the Act to the understanding of the people.He said he welcomed the idea of working together with chiefdom authorities to get the much needed resources for the development of the district.

At the end of the meeting,Paramount Chiefs and Council agreed on percentages.The Council is expected to get 60% and Chiefdoms will get 40% of total revenue collected each year.

However in the next meeting of Council of Paramount Chiefs,local authorities will present what they agreed on and endorse the decision.The printing of receipts will be done in four weeks and joint revenue collection starts after that.

Solomon Yarjoh is the Communications Director for the Fambul Tok program in Sierra Leone.
View all posts by Solomon Yarjoh →
This entry was posted in From the Ground: Program Updates from Sierra Leone, In the News, Kailahun District and tagged meeting in Daru. Bookmark the permalink.