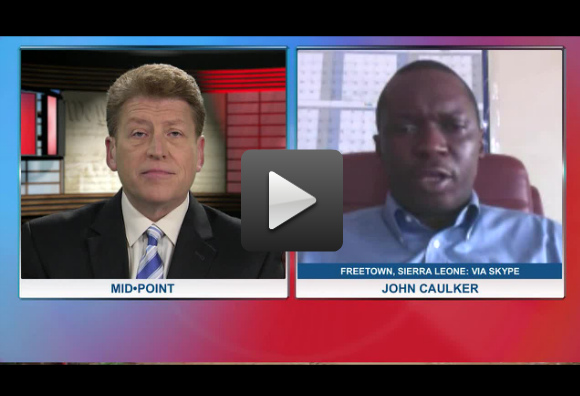 In this powerful 2-part interview on NewsMaxTV, John Caulker identifies the missing dimension in Ebola response in Sierra Leone – mobilizing communities and ordinary people to lead. He talks about the leadership role rural women are taking in sensitizing their communities now, and the need for more channels to support that important role.

John argues eloquently for external aid to do more than just focus on treating the virus, but for it to also support LONG TERM community strengthening. This would help mobilize trust in communities now (the needed ingredient for preventing the spread of the virus), and also leave the country better prepared for the next challenge. Watch both parts of the segment here: http://www.newsmax.com/Newsmax-Tv/Sierra-Leone-Ebola-John-Caulker-MidPoint/2014/11/12/id/606957/

Libby Hoffman is the President of Catalyst for Peace, Producer of Fambul Tok (the film), and a co-founder of the Fambul Tok program.
View all posts by Libby Hoffman →
This entry was posted in Ebola response, From the Ground: Program Updates from Sierra Leone, In the News and tagged Ebola, ebola response, Fambul Tok, Fambul Tok intervention in ebola fight, Peace Mothers. Bookmark the permalink.