As the Ebola crisis has unfolded in Sierra Leone (and West Africa, and beyond), the pull to the urgent is strong.  And rightfully so – everyone wants to act swiftly and effectively to stop the spread of the disease, as well as to provide healing care for all those impacted.  The Fambul Tok staff is no exception to that pull to the urgent – they have added a significant Ebola education/prevention component to their work, as you’ve read about in other posts on this blog.  And as do so many of us, they yearn to do more.

And yet, even while the international community works hard to respond in all the ways it can to the urgency of the need, it is critical – now more than ever – to continue to think and act long term.  And even while many are looking for large scale solutions (which we typically do by looking to large entities external to the area in crisis, whether it’s bringing the US military to Liberia, for example, or looking for more, or more effective, action from international organizations like the WHO), it is critical to think ‘small’ and act local.

The resources that often get overlooked in any crisis are in fact the smallest ‘entities’ and those closest to the crisis itself – ordinary people and local communities.  And yet, as we have seen powerfully with Fambul Tok, when the people most impacted by a crisis not only fully participate but actually LEAD in addressing that crisis it can be hugely transformative – for individuals, communities, and beyond.

But what does it take for the people most impacted by a crisis to actually lead in the work of rebuilding after (or perhaps even during) that crisis? As we have seen with Fambul Tok, first it takes a recognition that they can, supported by a long term vision and commitment to (re)build robust, localized networks of support – aka strong communities.

The small and local becomes big in its impact when it’s nurtured over time (the long term), and supported by processes and structures that connect, support, and magnify.  Since it began working in its first village over 6 years ago, Fambul Tok’s reach has expanded to close to 2500 villages today. 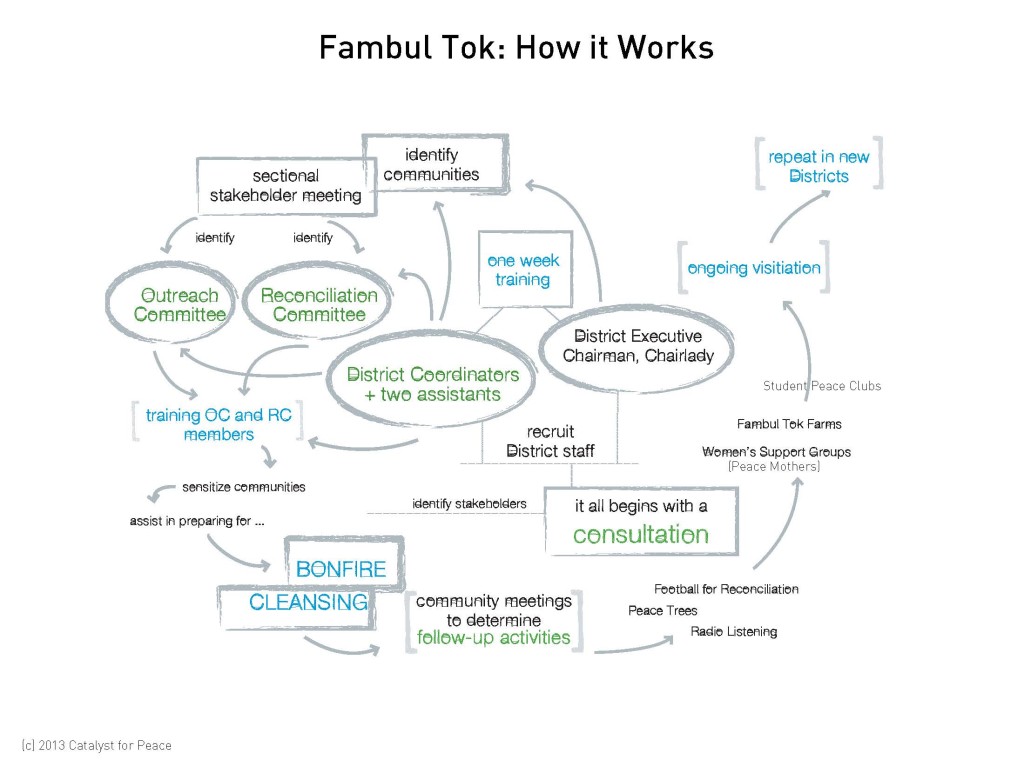 Fambul Tok’s process in the districts

And as a result, as any of the posts on this blog will attest, Fambul Tok communities are now engaging in development projects that are bringing needed income to their residents. They are tackling social and political problems like teenage pregnancy and domestic violence. They are addressing new conflicts that emerge and not needing to take so many to the police or the traditional authorities.  They are beginning to build and strengthen educational infrastructure. They are empowering women to lead.

The need for a long term approach emphasizing relationship- and community-rebuilding, done in a way which honors local capacity, doesn’t diminish in the face of a crisis like Ebola. In fact, it deepens.

There is a lot of talk now about the need for establishing better health care systems in Sierra Leone. “But if the communities are not working together,” says Fambul Tok Executive Director John Caulker, “The health systems won’t work. They won’t be sustained.”

This is true whatever the social goal is, he notes, whether it’s health, justice, empowerment for women, or child welfare.  “Only in a healthy community can these other systems thrive.  Otherwise it is like pouring water into a cracked bowl. Healthy community is needed to sustain the process.  This will be the challenge we will face as a nation moving forward.”

Preparing for post-Ebola community health needs to be happening NOW, and it looks much like the work that Fambul Tok is already doing to help communities heal after the devastating decade of war.

Even as we feel the call of the urgent, let’s have the vision, courage and commitment to also go long, and go local.

Libby Hoffman is the President of Catalyst for Peace, Producer of Fambul Tok (the film), and a co-founder of the Fambul Tok program.
View all posts by Libby Hoffman →
This entry was posted in From the Ground: Program Updates from Sierra Leone, In the News, Organization, Reflections and tagged catalyst for peace, Ebola, ebola response, Fambul Tok, local peacebuilding. Bookmark the permalink.