This post was written by team members of the Kono district.

Immediately after their reconciliation ceremony in 2010, Gbane yemor section, Gbane chiefdom in Kono district went into action. Having learned from Fambul Tok how to be independent and work for the development of their community, all the villages in that section settled down to start sectional farming. They contributed labor, seeds and food to kick start the farming activities. During the first year, not much was realised from the harvest, but they did not relent. During the second farming season in 2011, the community again contributed labor, seeds, tools and other needed resources without external support. 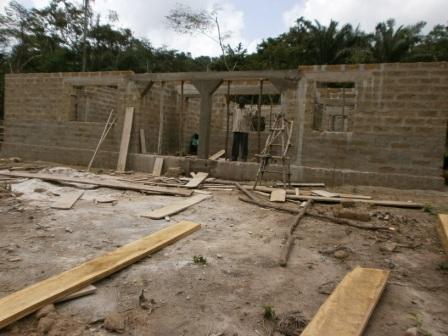 “We encouraged every village to provide labor and other forms of support to the farming activities, and indeed everyone’s efforts were realized,” explains Tamba, one of the reconciliation members in Gbane yemor section. He continued, “we realised that our efforts did not go in vain as we had a bumper harvest and later met and decided to sell some proceeds to start a micro-credit project.” After two years of the endeavor, the community got the sum of 12 million leones (about three thousand dollars).

As Fambul Tok had taught them to consult with everybody whenever they want to embark on a venture, the whole community converged to decide on what to do with the money. During a meeting, it was unanimously agreed upon to construct a health post which, when completed, will serve the entire community and beyond.

According to members of that community, women and children have lost their lives because there is no health facility and the nearest health post is several miles away. After consultations, part of the money was used to buy building items to kick start the project in Foindu, which is the sectional headquarter town.

“We have already started the project and what we need now is external support from organizations to finish” says Kumba Fillie, one of the peace mothers in Foindu.
She continued, “women and children are suffering because there is no health facility in this community and we would like government to support us and provide medical personnel.”

Solomon Yarjoh is the Communications Director for the Fambul Tok program in Sierra Leone.
View all posts by Solomon Yarjoh →
This entry was posted in From the Ground: Program Updates from Sierra Leone, In the News, Kono District, Reflections and tagged follow up activity in Gbane chiefdom, Kono district. Bookmark the permalink.

One Response to Gbane community starts construction of health post