Former Commander Mohamed Savage apologizes to the people of Kono 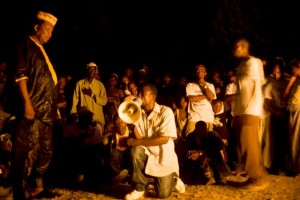 These were the words of former Sierra Leone Armed Forces soldier and also rebel commander, Mohamed Savage, alias Col. Savage, who headed battalion of soldiers and rebels in Kono district in 1998.

Before his apology in Tombodu town in Kamaa chiefdom on Friday, November 12, an event facilitated by Fambul Tok, Savage, as a symbol of respect for tradition, handed over kola nuts for the community through Paramount Chief Aiah Melvin Ngekia. He said he had not come to bribe the people of Kamaa chiefdom but to apologize and asked for forgiveness.

Receiving the gifts, P.C. Ngekia said he appreciated the efforts of Savage and appealed to his people to listen carefully to his testimonies adding that they are not there to judge the former commander. He said retaliation was not the answer adding that Savage is part of the Kono community as he hails from Ninikoro chiefdom.

Testifying before thousands of villagers on Friday night, Savage went on to state that he did not join the Army to harm the very people he took oath to protect. He said he did not bring the rebel war to Sierra Leone, adding that he fought to protect the people of this country.

“As you are aware I was not alone, I was with thousands of soldiers, rebels and civilians during that period but all fingers are pointed at me for committing atrocities,” Savage disclosed.

The former soldiers recounted punishment meted on him. He stated that he was incarcerated for over 8 years at the Pademba road central prisons for his alleged role during the West Side Boys saga.

“I was imprisoned at the Pademba road central prisons for 8 years, 8 months and 16 days and released on April 28, 2009,” Savage remembers.

He said that while he was in prison the idea came to him of apologizing to his people for all that went wrong. Right after his release he learned about Fambul Tok, and decided to come to Tombodu and asked for forgiveness through the facilitation of Fambul Tok.

During his apology, Savage said if he had wanted to, he could have joined the government security apparatus without showing any remorse for his actions but said he equally has pains in his heart and unless he apologizes it would remain a heavy load in him. He regretted joining the Army adding that after all he did not realize anything.

Savage, on bended knees, asked for forgiveness and assured that never again will such thing happen.

Paramount Chief Ngekia,when asked whether Savage has been forgiven, he said on his own behalf, he has forgiven him.

Prior to Savage’s apology, three people at the bonfire testified about atrocities he committed on them or their loved ones. One of them, Femba Karku, appealed to the people not to harm Savage but to forgive him in the spirit of reconciliation.

On Saturday morning, four sections in Kaama chiefdom–Kongofinja, Dangbaidu, Sukudu and Gbondu–gathered in the chiefdom headquarter town of Tombodu to perform cleansing ceremonies so that their land would be free of bad omens.

Solomon Yarjoh is the Communications Director for the Fambul Tok program in Sierra Leone.
View all posts by Solomon Yarjoh →
This entry was posted in In the News and tagged ceremonies. Bookmark the permalink.