The SIGNIS Jury at the 14th Annual Zanzibar International Film Festival in Tanzania has recognized Fambul Tok with the prestigious SIGNIS Award. On June 25, 2011, the jury announced their decision at the festival Awards Ceremony, praising Fambul Tok‘s narrative, editing and symbolism. 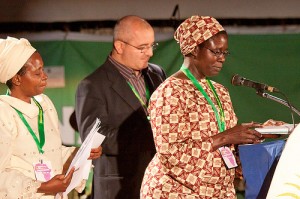 “This film foregrounds Africa’s contribution to justice and conflict resolution mechanisms that can be appropriated by institutions of justice, ” the jury explained. “The editing of this film prioritizes human emotions that the camera captures with depth. The symbol of fire, throughout the narrative is reminiscent of the call to African traditional value of community.”

For the SIGNIS Jury to appreciate and celebrate not only the film’s powerful message but its innovative storytelling is particularly meaningful to director and producer Sara Terry, who set out to make a film that, as she describes in her Director’s Statement, “spills out more gently, more subtly— tracking the story of a culture that is being reborn before our eyes, and of a people who themselves are being renewed as they revive their ancient practice of fambul tok, of resolving conflict through conversation.”

The members of the SIGNIS Jury were Dominic Dipio (Uganda, President), Fabrizio Colombo (Italy), Veneranda magele (Tanzania) and Paul Samasumo (Zambia). SIGNIS, an NGO working with media professionals in all disciplines all over the world, seeks to transform culture “by promoting Human Dignity, Justice and Reconciliation.” Fambul Tok International, and the Fambul Tok film and book, have similar goals. Awards like SIGNIS show we are on the right path to achieving them.

This entry was posted in In the News, Recognition, The Film and Book and tagged Fambul Tok, film. Bookmark the permalink.